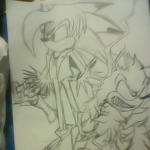 "During the time I've expended growing up, I learned something very important over the last couple o' years: Arrogance, much like that of anything else, has its price. Yet, the same may as well be said for every single action a human can take. Yet, for me, I learned that you simply can't be the "lone wolf " person in life, as human nature is about depending on each other, and even supporting one another. I have to operate on my operate growing up thinking that if I did all of it, it would put others at ease. I can try to stay a lone wolf as a character, but in the end, the lesson reigns true, regardless of what you do. Always remember to know your limits." - My personal experience with Arrogance.

Hello and welcome to my profile! Name's Nitrogen218, but I'm mostly called Nitro, but I like to call myself N-218. If you aren't aware, I am a skilled Fan character artist, and I tend to improve my characters in their articles and pictures in hopes of suiting your requirements or interests. I'm not just a sonic fan, though. I am also a transformers fan, and a Call of Duty fan, too. From time to time, I may a horror game here and there .

The first Sonic game I've ever played was Sonic Mega collection Plus for PS2, and I had been a fan ever since. Likewise, I eventually took an interest in drawing, which I hadn't done since I was very young, then I grew into it and practiced my skill on the Canon series characters years prior to finding this site. Then when I found this site, I had begun practicing my own characters into what they are today.  I hope I can assist you if you need something.

If you are wondering, yes, I do take requests, and can never say no to one. Leave a message on my talk page if you want to send a request. You won't regret it. Lastly, if you would like to add any of your characters to any of my own, be it fan character or fursona, be my guest.

Bold Topics are ones that I really enjoy.

Italicized Topics are things I like, but don't necessarily enjoy

Not Finishing things that are started

Playstation 4 Games I own

Transformers: Rise of the Dark Spark

Bold is for those who I consider to be family or kin.

Italicized is for those I consider to be friends and friends alone.

Places you can reach me

This is all the requests I have done since I started taking requests.

Yes, I know they are all in lineart. Colored versions will be up soon...

Torrent the Darkspine Raven
Add a photo to this gallery
Retrieved from "https://sonicfanon.fandom.com/wiki/User:Nitrogen218?oldid=1804462"
Community content is available under CC-BY-SA unless otherwise noted.