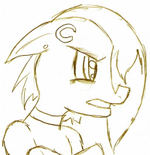 NinjaZane, the Who, What, When, Where and Why!

My vast imagination has brought me to create a lot of characters over the years, but I think my Sonic characters are in need of their own space, they can't share the same mind as my Tales of Legendia characters or my Pokemon characters; let alone just keep them shoved in a three ringed binder and let them start to rub the pencil lead off slowly, with this site I can let them free! I have a lot of characters to upload...

Ok from the pic to the right you can see I was right about the vast imagination, as I sit in the middle, Kal, Fox Tail, and Shay surround me. They are my imaginary buddies who follow me around school, and now you are thinking that I'm a nut job, well... Your right... Anyway they follow me around where ever I go, Kal and Shay are brothers, and they are Shinigami, Fox Tail is a really smart Cat, he originaly was going to be one of my Sonic character, but I cut him because he wasn't what I was looking for. My first Sonic characters were created when I was like in the 7th grade. The heroes consisted of Kyo the Grey Cat(male), Andy the RedFox(female), and Toriko the Sparrow(female). The villans consisted of Coco the Orange Cat(male), Bonnie the Rabbit(female), and Damien the Weasel(male). Out of all six of those characters only one made it to my new saga, and that's Andy. She is now paired with 8 other characters, along with many others, to fight against the evil that threatens the world. My story Chaos Dark Days, is placed in modernday time with small technological advances, where it starts off with Andy working at a farm, she leaves that farm to go find Sonic, along her way to the city she meets some new friends, and when she gets to the city she meets even more friends, now Andy and six others carry one chaos emerald with them, and they must keep it with them at all times, they are called the Chaos Sisters, they sit under the Master Sister or the one who is the Master Emerald.I was born in California, in October on the 14th. I now live in Texas and plan to stay! This saga is one of many that I am currently typing up, but out of all the sagas that I type up, this one will be the longest. I also have a small side story called Web House. It's a crazy house of animals who love to cosplay and or be them selves.

You can find me on-

P.s. I'm a little depressed right now... I have no motivation to really work on anything... Oh and the Web House Story... Yeah it's goingto be a LOOOOONG time before I can continue working on that - the original file has gone missing!

I have a lot of Characters so yeah... Enjoy the long list...

Kids from the Future

Children of the Past

~Hey, extremely curious about a certain character of mine, that isn't up yet? Tell me that you want to know, and I'll get it up there for ya as soon as I can, It will be no problem~

~Please Alert me if any links or videos are messed up my page, Thank you~

Retrieved from "https://sonicfanon.fandom.com/wiki/User:NinjaZane?oldid=293260"
Community content is available under CC-BY-SA unless otherwise noted.