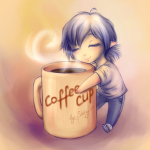 "Let's just kill them, and get it over with." -NeoExlucky

Welcome to my humble abode, my name is NeoExlucky. I've been on the Sonic Fanon Wiki for a little over 2 years now. I mainly run the roleplay series; Tales of the Echo, but I've been thinking of writing a couple of fan games as well, going over some of the other events that happen in the series.

In case you can't tell, I have a slight addiction to Coffee. This mainly came from a joke IRL where I drank five cups of coffee at a show choir contest, between sets. It's been something that's stuck with me ever since. I live in the midwest (Indiana specifcially) but I'm also a bit of a nightowl and almost am always online, even if I'm not responding. If I'm not on, I'm probably doing something in real life, like going to class or doing one of my many theatre activities.

In real life, my name is Brandon Hart. I'm a freshmen in college who lives at home because 10,000 dollars for a tiny room to live in is crazy. I write and I act, and that's about it for now. I used to be in show choir, so I can sing and dance (at the same time). I am a Theatre Major with a concentration in Acting and Directing. Currently I'm working on my college's productions of Emma and Rocky Horror Picture Show.

What you can call me

Ex: What I was called back when I was just Exlucky

Lucky: Very rarely am I called this, and I prefer it that way, but I'll answer to it.

NeoExlucky: I guess if you want to write it all out that's fine.

Overlord of Coffee and Destruction: Thank you. *Bows*

2000 Edits: Starting to make some pages around here

3000 Edits: Probably from all my roleplay edits.

Rollback: So that happened!

Don't call it a comeback!

Pianoteen's been a close friend of mine for...pretty much the entire time I've been here. He's helped me with a ton of stuff, and one of his main characters (Christina) is even related to my main character (Neo)

TheDarkMantis15 (Mantis) is a really good friend of mine as well. He's been really helpful and really friendly to me. His character Blitz is one of my favorite characters on the site. Unfortunatly, he ate my hands.

Cyclonestar was a friend of mine during my early days. She had a really cool character who I secretly shipped with one of my characters, until he got a different girl.

Nikki-Kaji is a really good friend, I've really admired her characters and her art since I first came here.

MHS and I started Rping together pretty early in my series, and ever since he's been a valuable member of my series and a good friend.

Zapor has some fun characters, although they're a little random. At first, I didn't know how to feel about them, but as time passed I began to really like his characters, and currently ship a character of mine with his. Go Zaho!

Saren is someone who started off a little on the other side of the spectrum for me. He was someone with lots of really good roleplay potential, and great characters, but was so detailed that it was a little gruesome and too dark for my taste. However after some talking, he soon became a really good friend of mine, and is now apart of the the Tales of the Echo Team!

Retrieved from "https://sonicfanon.fandom.com/wiki/User:Neoexlucky?oldid=1699158"
Community content is available under CC-BY-SA unless otherwise noted.