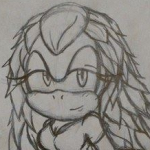 Elly has an intro

So you're looking at this, and that's really cool~

I'm Elly, Elly the Dragon! I'm doing stuff in this fanon as a way to practice for my own original work, not affiliated with any series. Regardless, I am very much a big Sonic fan; Sonic was one of the first series I was able to play (had to hide video game stuff from parents, limiting me to handhelds. As such, my first and favorite series are the Battle Network series, the Pokemon games, and the Sonic games somewhat less than the last two), and I started off with Sonic Advance 2, 3, and Sonic Battle.

I'm a semi competitive Pokemon battler, so if that's your thing then that's neat! I'm a pretty sub-par artist but I'm practicing so THAT'S GOOD.

The characters I have on here will most likely just be adaptations of characters from my work. Regardless, if you're interested in a roleplay with one or some of them or something, I might be for it, I dunnooooo~

I'm currently working with SOMEONE on SOMETHING. My character pages will update when the things of the happening happen and the somethings of darkness and light and the hearts of death and the shadow of life etc etc.

My deviantart is http://ellyaely.deviantart.com/ warning: may contain my sub-par art

If you have anything to say to me, send a message my way! I'd like to think I'm nice~

People have been bugging me to make a list so here goes. Those in bold are my closest friends, those italicized are only kind of on (as in, haven't really contributed much personally to, or only kind of care about) the wiki, and that's all. If you think you should be on the list, put yourself in the Pit of Judgment and I'll think about it~

Retrieved from "https://sonicfanon.fandom.com/wiki/User:Ellyaely?oldid=1654413"
Community content is available under CC-BY-SA unless otherwise noted.