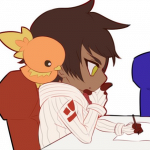 I'm "EZSulten", but if that was too obvious for you, my name's Joe. If you want more detail, there's not much else on my name besides the fact that the "EZ" in "EZSulten" is just how it's pronounced, "E-Z" (Easy). I put it there because, it's supposed to state that I'm an easygoing guy, but I didn't want to put in the "going" or make it "EG". As for "Sulten", I just made up the name from the word "Consultant" one time when I was young and it sounded cool, so I made it mine. All I know about the actual word is that it means "hungry" in another language.

Well, in grade 4 I tried to make my own Sonic character called "Bolt The Hedgehog". Bolt was basically a lookalike of sonic, except he had sonic's spiky hair with additionally sidehairs like knuckles, a white furry belly, white gloves with additional claws like wolverince, black boots with a middle yellow lining and a string necklace with three green shards which was supposed to be the source of Bolt's chaos abilities as well as his main chaos electrical powers. I think the idea of the three shards was that they were shards from the Master Emerald. He was a good character that I made a comic with and impressed my friends, but in the end he wasn't as original as I thought. The idea of Bolt was then thrown away until I came up with a new character called "Sulten The Civet". Sulten the Civet was based off of me, a slight bit off of bolt and a little more research into Sonic Canon as well as the actually animal than Bolt required. My main goal was to make him an animal that not everyone had heard of and to make him more original than Bolt was. I'm also here, cause I like roleplays and making stories, so this is actually extending my ability to make good stories. I don't know what other things I could find on Sonic Fanon, but I feel like it'll be pretty cool to be apart of this site.

Retrieved from "https://sonicfanon.fandom.com/wiki/User:EZSulten?oldid=1437092"
Community content is available under CC-BY-SA unless otherwise noted.