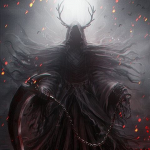 aka The Lord of Darkness

Basic Information about myself

3. I have a sorta twisted mind.

4.I enjoy RPG style games, but I dabble in shooters, fighters, and racing.

7.Sword of the Abyss

2. Vanguard the Savior(An android I created to be a hero)

4.Squall the Hedgehog(A Final Fantasy and Legend of Zelda crossover)

6.Gabranth the Hedgehog(The lord of darkness who fused with Star)

7.Yevon the Mad One(The crazy hedgehog that tried to destroy all existence)

1. Time is but a window, death is but a door, I'll be back.- Vuxo to the party after his defeat.

2. I told you, victory was my destiny.-Vuxo to the party after phase 1.

3.How is the will to live this powerful?-Yevon after losing at the final battle.

10.Legend of Zelda games (Wind Waker and Ocarina of Time)

12.Perfect Dark. (My first shooting game I played, I still play it, which is an achievement because it was on the Nintendo 64.)

3.Marth from Fire Emblem(He's always killing me in Smash Bros.)

Retrieved from "https://sonicfanon.fandom.com/wiki/User:Dionisio_Garcia?oldid=1629717"
Community content is available under CC-BY-SA unless otherwise noted.