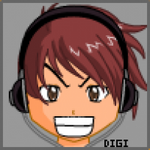 Dakota "Cody" Rodriguez a.k.a. DigiKatana has spent his life without anything more exciting than having a tornado two miles away from his house happen. He spends his day sitting in his seat at school drawing instead of actually doing work, which he finishes when his sketchbook gets taken up. He is an Otaku who can't help but ignore the people that call him a nerd at school. He has never been in a fight due to his small build, though he has been punched twice this year. He hates sitting still unless he's drawing manga or sitting in front of the computer screen while his brain slowly dissolves(for the better, he thinks).

On I'm Bored Chatroom? no.
Retrieved from "https://sonicfanon.fandom.com/wiki/User:DigiKatana?oldid=1110942"
Community content is available under CC-BY-SA unless otherwise noted.