Any life is just as important as a human's. 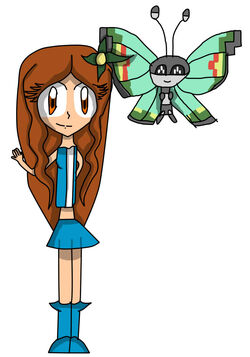 Emma Calero is a fan character created by Darkest Shadow. She also the best friend of Louis and Alexis. She is one of the main protagonists in the Depths of Our World series. She is the younger sister of Wendy Calero, and the older sister of Melissa Calero She has a weak Mid-Atlantic accent (Most words come out as if she were American). She is meant to symbolize care.

Later on, Pianoteen redesigned her to have a more elequent outfit. She first had the same dress as Ursula in the Pokemon series. Her bangs were really long and her hair was tied with a gigantic bow.

Afterwards, she was designed with her Kalos outfit. She wore a light blue vest and a white shirt under it. Her shirt is cropped, so you can see her belly. She wears a light blue knee lenghth skirt, and matching boots to go with it. As an accessory, she added a nice little flower in her hair.

Emmanuelle Julie Calero is a thirteen-year-old human girl living in Olivine City Johto. She lives with her mom, Lorraine, her dad, Richard, her little sister, Melissa, and her pet Persian cat, Fluffy, and her pet mockingjay, Flame. She used to live with her older sister, Wendy, as well, until she went to college. Her room is on the top floor of her little household. However, what's unique about it is that there is barely any electricity. All of her electricity in her room, is runned by rapid animals. When they're tired, Emma takes care of them and brings in the next set.

She has a huge adoration of animals and cares for each and every one of them. She goes up in the treetops and throws tea parties with them. Everyday, she would go outside, and lots of animals would join her in her walks, cloud watching, or events.

Emma is also a pokemon coordinator. She is very strong, and wins lots of battles. She has never won a grand festival before, but she trains her pokemon long and hard. She also babysits other pokemon for a very small price, and works with her grandparents for a part-time shift at the daycare centers all over the Hoenn region. Lots of the pokemon are attracted to Emma as if she were wearing honey!Her life isn't revolved around animals though. She also has a pretty good music career as well. She plays the guitar very well, which Louis helped her learn. She also has a beautiful voice that attracts animals into her own room.

Emma was born on May 19, and was raised in Olivine City. She is the young sister of Wendy Calero and the daughter of Lorraine and Richard. She usually would go out to a route an befriend pokemon and other natural animals. When Emma was 3, she entered pre school. She was bullied because they thought she was lying about her having the ability to talk to other animals. Later on, Emma talked to a bunch of animals and the pre schoolers were so embarrassed, they banged each others' heads with frying pans.

At the age of 5, Lorraine had another baby girl. Her name was Melissa. She talked to Wendy, who was around 9 about having another sister. Wendy told her it was going to be alright. Melissa was not a devilish child. Emma actually liked having someone like Melissa as a sister.

A few years later, Emma meet a young boy a year older than her. His name was Louis. He was s sweet to Emma, but she asked him on where he goes to school. After hearing what he said, he asked Rachel if she could sign her up to be at the Dark Angel Academy. Rachel said it was going to be dangerous, but she was fine with it later. Emma had a talk with Leon, Louis' Step Dad. But he said that she needed to talk to his dad, who is running a school in the clouds. So she went up, talked to him, and went there for elementary school.

When Emma was nine, Louis asked her to go on a litle trip to Hoenn. He had a close friend who lived in Fortree City that he wanted her to meet. When they arrived, they went to her huge house. She wasn't home, but the two heard music coming from the corner. It was the girl singing for a huge crowd from all over Hoenn! Afterwords, they snuck backstage, and right after she said "Good Night Fortree!" she was shocked to see him and greeted Emma with a bit too much kindness. Afterwords, the two became best friends. Right now, Emma is Thirteen years old. She is a great singer and a beautiful girl to all of Johto. She had also made a romantic relationship with "Zack-the-Di-viiiiiiine". Though they are in love, Emma wonders who she would date if Zack dumped Emma and dated Erica.

The best way to describe Emma is extremely well-behaved. She is obedient to every command that she is given. This could also make her easy to be manipulated by others. She doesn't have discipline from her parents, nor her sister, but behavoir reports and expectations are high for Emma and her sisters. She always tries to stay well-mannered so others can view her as a nice girl.

Emma also happens to be very neat. She keeps everything nice and organized, like her room. She does an awful lot of cleaning around the house to keep it tidy. She doesn't have OCD over it though.

She is also taught very strict rules that make her somewhat elegant and proper. Some of these include perfect posture, raising her pinky while drinking, and making sure that her feet aren't dangling.

All kinds of animals seem to really like Emma. Everyday, new animals come into her backyard for affection, care, or patching up. Somtimes, animals would go into Emma's room and ask her to sing or play a song on the guitar. Whether it's birds, rabbits, frogs, dragons, or snakes, Emma has a way to get along and be friends with them.

Emma is seen to have many outfits. (Some are offical and some are cosplay)

Emma's Maid's Outfit and her outfit in Christina Generations

Emma as May Haruka

Emma as Cream the Rabbit

Singing- Emma has always been a great singer. She doesn't really sing in public though. She actually sings in her own backyard, and her own house. Her singing also attracts all sorts of animals. Lots of people say she has the voice of an angel. She also sings around Louis and his friends, and it never gets annoying.

Guitar Playing- Emma can play guitar. At first, she was absolutely terrible at playing it. So bad, that not even animals would peek out her window. Then, Louis taught her how to play, and she just took off. She loves playing on her porch, or the deck.

Ice Skating- Emma, happens to be a very good ice skater. She is a little more into figure skating, as she loves spirals, skating backwards, and hops. She isn't very fast on these, which is the cause of her losing competitions, but she is still probably the most graceful skater out of Louis's circle of friends.

Pokemon Training- Emma is a great pokemon trainer. She trains and raises pokemon to be the best they can be. She also raises them to compete in contests. Emma seems to have a great talent as a pokemon coordinator. Her skills got her far enough to even beat Louis himself at the Temprecassa Tournament. She also happens to babysit pokemon for trainers who need to attend other things.

Communication with Animals- Emma has her trademark ability to communicate with animals. She can somehow tell what they are saying. She learned how to do this ever since she was just a little girl. Everyone finds this somewhat cute. She also can manipulate animals into doing whatever she wants.

Wendy is Emma's older sister. They interact many times when Emma returns home from school and they always stand up for each other. Wendy is like Emma's guard and protects her.

"As am older sister, I will protect you!"

Melissa is Emma's younger sister. As an older sister, Emma protects Melissa from harm and danger. Emma teaches Melissa her life, but she is too young to understnad.

Cream is the first mobian friend Emma has ever made. The two like to talk a lot when they visit each other's worlds. Cream finds Emma to be the sweetest girl she met.

"If you want to, I could get Sonic for you."

Emma and Amy are definetly not the best of friends. They don't hate each other, nor do they like each other.

"The animals and I decided to give you a present."

Silver hates Emma because he is jealous of her skating skills. However she treats Silver as a friend, but doesn't really like it when he blows tantrums in front of everyone.

Zack is Emma's british boyfriend. They web chat a lot and see each other often in school. Though they are dating she might consider breaking up...

"You're like family to me." Emma and Louis have an extremely close friendship. If Emma wasn't dating Zack, Louis would be her second choice. They interact in most roleplays, fanfictions etc.

Marmalade is Emma's best friend. They interact in many roleplays, fanfictions,episodes of the DRA anime and comics.

Dawn and Emma are rivals in Pokemon Contests, yet great friends when they are doing other things. They don't see each other that often though.

Feel free to add your characters.

Feel free to add your characters.

Retrieved from "https://sonicfanon.fandom.com/wiki/User:Darkest_Shadow/Emma_Calero?oldid=1798745"
Community content is available under CC-BY-SA unless otherwise noted.