Start a Wiki
This is a very outdated version of Marmalade. For a more updated version, click here!

I guarantee you too someday will be beautiful. 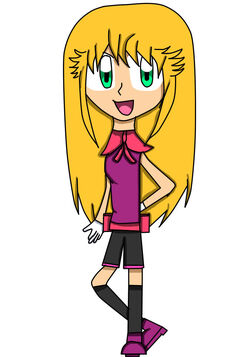 Marmalade Heartswell is a fan character created by Darkest Shadow. She is also the current girlfriend of Louis Robinson and one of the main characters in the Depths of Our World Series. She is a pokemon trainer and coordinator from the Hoenn region and likes to sing. Many people compliment her for her beauty, but it doesn't make her super popular.

Marmalade didn't really change that much. Like her friends, she started out as a young girl who had a crush on Louis. She used to wear silky pajamas and fluffy slippers. He hairstyle and eye color was the same.

Later on, she was made much older. She also became a singer, as well as a pokemon trainer. Her hair was the same color, but much longer. She was also made as the daughter of Rapunzel, therefore being "Princess Alexis of Rapunzel Fitzerbert".

Later on, the idea of the Rapunzel relation was scarped. She was also found out to be dating Louis.

Alexis Sasha Heartswel is a thirteen-year-old human girl living in Fortree City, Hoenn. She is the only child of her unnamed mother and her father, Philip. She has a somewhat humble home. Her room is down in her basement, and is the biggest room in the house. She is a very good singer, who is recognized as the Idol of Hoenn.

Marmalade is a pretty popular school girl. She sometimes gets away with things, and gets complimented by her beauty. As a popular girl, she is a socialite and usually goes to the mall with her friends. However, she doesn't take her popularity to the point of boasting it to "non-popular" kids.

Marmalade is also a pokemon trainer and coordinator. She chooses beautiful pokemon to match her own beauty, such as her liligant. Her skills at her coordinator are pretty good, as they got her to the Grand Festivals. The highest she ever placed was in the Top 4, though.

On August 9, Marmalade came out. She actually came out a week late. Her hair was already grown to her shoulder.

At the age of 2, she took interest in becoming a model. She wasn't that pretty, but definetly cute. People started recognizing her more and was known all around.

When she was 3, she meet Winona, Fortree City's Gym Leader. She told her to fly high at the Dark Angel Academy. She thought she was crazy, because she never heard of that name before.

When she was in kindergarten, she started taking interest in singing. When she started trying. Everyone started to admire her. Also people called he pretty, and cute.

When she was 6, she has been hearing about this girl named Emma Calero. She started to admire her. Also she mee a boy named Louis. She became his friend instantly.

Wen Marmalade was 8, she joined the Dark Angel Academy and started to dream about becoming famous. Though she was a little rude, as well as polite.

When Marmalade was 9, she was doing a concert in front of a crowd of 300. After she sang, she meet Louis and the girl Emma backstage. She was so thrilled to see Lou again, and as for Emma, Marmalade was pleased to meet her.

As of now, she is currently 13 and is in love with Louis. Her life is going well so far.

Alexis is outspoken and brave. Like the qualities of a hero, she takes many risks to save people. She likes to sing to entertain her city and friends, but she tries to keep it through her friends and family and no where near the news or paparazzo/paparazzi.

At some points, Alexis can be short-tempered. Her anger could get the best of her when she is during a fight, but this only happens during serious battles.

Somehow, to other people, she pretends to be "Lady-like" and fakes an extremely realistic British Accent.

"Oh, then I'll  just give up my bloodstone to somebody else."

Marmalade and Rouge aren't really the best of friends. They don't see each other-being nearly worlds apart. Both think each other are beautiful though.

"If my boyfriend is your nephew, then good luck, because ten years from now, I'll be your niece-in-law."

Shadow and Marmalade are good friends. They sometimes talk, more times when Shadow is with Louis.

"Your talkin' to the wrong girl."

Blaze doesn't really appriciate Marmalade's sassy nature. She finds it un-ladylike, which she never found out about her.

"What in hell's name did ya call me?"

Like most of the other characters, Marmalade and Silver have a mutual dislike of each other. They don't talk much.

Louis and Marmalade have known and been dating for quite a while. They always hang out and watch the sunset together. They basically do anything together.

"Let heaven be praised that god made us meet!"

Emma and Marmalade were almost like sisters. They barely had anything in common, but they love and support each other as if they were family.

Christina and Marmalade are friends, but they don't really know each other. They talk every now and then, but not oftenly.

♪When I'm stuck with a day that's gray, and lonely, I'll stick out my chin, and grin, and say!♪

Thanks for the compliment!

Tomorrow, is my first tour around Hoenn, you all want to come?

Retrieved from "https://sonicfanon.fandom.com/wiki/User:Darkest_Shadow/Alexis_%22Marmalade%22_Heartswell?oldid=1752890"
Community content is available under CC-BY-SA unless otherwise noted.