The MP5 is a German 9mm submachine gun manufactured by Heckler & Koch GmbH. It is very popular with military & law enforcement agencies all around the globe. Numerous individuals & organizations within the Sonicverse have used it as well.

Since the introduction of the G3 battle rifle in 1959, Heckler & Koch worked to develop a series of weapons based around the same roller-delayed blowback action. One of these was the HK54 submachine gun – later to be designated "MP5". First developed in 1964, it went into production two years later and was adopted by the German Bundespolizei. Since its introduction, the MP5 has gone through numerous developments and has been produced in numerous countries around the world.

Owing to its long production run, the MP5 has been produced in several variations. Here are a few of them:

In 1974, Heckler & Koch introduced the MP5SD (SD = "Schalldämpfer", German for "Suppressor"), a silenced variant of the MP5. The MP5SD features an integrated suppressor & special round handguard, although the suppressor can be detached. Thanks to the two-stage design of the suppressor, it is possible to use ordinary supersonic ammunition.

The MP5K ("Kurz" = "Short") was introduced in 1976. Featuring a shorter barrel, no stock, and a vertical foregrip, it has a higher rate of fire due to the shortened bolt. It shares the same trigger group as the MP5A2. In 1991, a variant called the MP5K-PDW was introduced, which is the same as the MP5K, but has a "Navy" trigger group and a side-folding stock.

The MP5 is a favored weapon of G.U.N. troopers. In particular, they seem to be fond of the MP5A3 or MP5A5 variants. They can be seen using this weapon in both the video games & Sonic X.

Shadow has been seen carrying an MP5 on numerous occasions. Most prominently, he was seen carrying one in his self-titled video game, or at least a gun that resembled an MP5. Strangely enough, during the intro sequence, he cocks the weapon as if it were a shotgun.

Shadow also wields an MP5 in BearfootTruck's Sonic fanfics. To be specific, he wields an MP5A5 with an ambidextrous selector switch. He is first seen using it in the one-off story "Sonic Hotcakes", where he uses it to gun down a group of Robotnik's robots in order to save Cream. 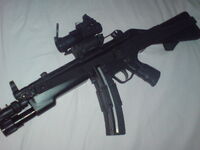 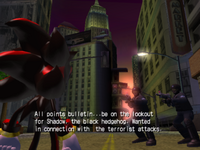 A group of G.U.N. soldiers confronting Shadow, wielding what appear to be MP5s 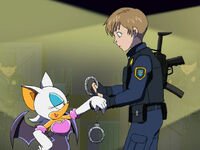 Rouge & Topaz in Sonic X. Topaz has an MP5A3 or MP5A5 strapped to her back 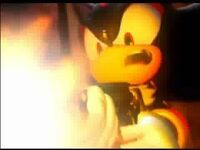 Shadow cuts loose with his MP5

Shadow blasts an unseen enemy with his MP5 while Knuckles looks on. Note that Shadow is firing it one-handed
Add a photo to this gallery
Retrieved from "https://sonicfanon.fandom.com/wiki/User:BearfootTruck/Heckler_%26_Koch_MP5?oldid=1563647"
Community content is available under CC-BY-SA unless otherwise noted.