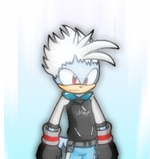 Hey! I'm a big time sonic fan ever since I was a little kid. The 1st sonic game I ever played was Sonic Advance, and from there, I got more interested in sonic and soon played most of the games in the series. I am also known as Firestyle on yoyogames and other game sites and themegajord on youtube. I create all sorts of games as a hobby. Feel free to look me up and check out some of my games.

Plan on making this my biggest Rp yet. This RP will be long and interesting, full of twists and surprises, and will allow for many characters to test their mettle against powerful villains.

A roleplay I plan on doing in the future. The plot involves the sudden appearance of a doppleganger, who procededs to cause trouble in the lives of the residents of Mobius.

S - Extremely powerful and God-like, but beatable under certain circumstances

A - Very powerful, yet beatable

B - Power a bit above average. Still formidable

Paroi the Guardian - BB or A

Wes the Unknown - B

Ibara the Blussoran - BB (Normal), A or AA (Delta Force)

Chimera the Forsaken - A

Velious Wester - Between S and SS

Nemesis, the God of Chaos - SS

Add yourself if you want to be friends :)

Retrieved from "https://sonicfanon.fandom.com/wiki/User:Banzai123?oldid=1599430"
Community content is available under CC-BY-SA unless otherwise noted.