Ursa the Doll is a plush toy who comes quite close to being an actual bear. Being a plush toy, she does not age, but she looks as if she's a teenager. 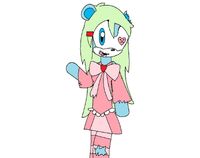 Ursa was originally a normal plush toy; couldn't talk, eat, move, etc. However, a scientist wanting to experiment on bringing inanimate objects to life obtained her and used her as a test subject. After the experiment, Ursa became so life-like that the only thing dividing her for other sentient being was the cloth and stuffing she was made of. However, after the experiment gained some publicity, the scientist eventually disowned her; the true reason is unknown. Having forgotten that the doll now had thoughts and emotions, this abandonment broke Ursa's heart.

However, she didn't let this get her down; she decided to find a home where she could live among everybody else. She ended up getting roughed up along the way, but she was able to get through it all. She even replaced an eye she lost!

Ursa, despite having lived a hard life, is very sweet. She's one of the biggest optimists of all time. Contradicting her mostly feminine appearance, she's just about as girly as Erica (a.k.a. not that girly at all).

Ursa is blue with messy green hair. She wears a torn, pink dress and various heart-shaped accessories. One eye is a normal, blue eye while the other is a heart-shaped button. She wears striped socks with ballet-style slippers. Her mouth has been stitched over, however it can still move freely. Her arms and legs do not not have appendages.

Ursa is voiced by Ikue Ohtani in Japanese and Veronica Taylor in English. Here are some things she'd say.:

"Hey Erica! Check out this new game I got!"

Retrieved from "https://sonicfanon.fandom.com/wiki/Ursa_the_Doll?oldid=1823349"
Community content is available under CC-BY-SA unless otherwise noted.