He can't do that! We don't belong to anyone!

— Tyler complaining to Ash, The Tale of a Wolf

Not to be confused with Tyler the Wolf by Schoolbus13.

Tyler the Wolf is a young male Wolf who is a minor character in The Legend of Fox the Brave. He is a member of the Wandering Wolf Pack, the younger brother of Ash the Wolf and youngest son of Samson and Anna. As a very young pup, he had a habit of repeating what other people said three times. 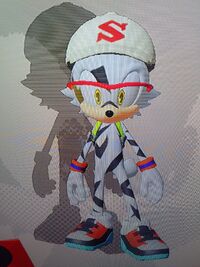 Tyler is a young pale gray, almost white Wolf with a black streak pattern identical to his brother Ash's, and amber eyes. He wears a cap identical to Rex Storm's, wristbands identical to Markus the Hedgehog's, a green backpack, red-framed glasses, and red-orange, white, black, and blue sneakers.

Tyler is around Pixie the Dog's age, and is thus very young. As shown in Wandering Secrets, he followed his big brother Ash and the apprentice Benji around, and repeated anything someone said three times because he couldn't fully speak yet(being the equivalent of a human toddler). As he grew up, Tyler developed a close bond with his family, and even at his young age, understood that the Jackal Squad were very bad.

The Tale of a Wolf: Tyler first appears in the Prologue, when Samson sees him peering out from behind his mother with his brother Ash. In the first Chapter, Ash feels Tyler squeeze his tail as the Pack heads to confront the Jackal Squad. When the unnamed jackal leader states the conditions for his victory in his fight against Samson to be that he controls the Pack, Tyler complains that they don't belong to anyone. When Ash is kidnapped, Tyler spots his brother's predicament and calls to his father. He is later asked after by Ash during the raid to rescue him, and mentioned by Miriam that he stayed at the Pack's camp. He does not appear again.

Hunt for the Lost Pack: When the warriors and the Wandering Wolf Pack break out of the Dark Legion's prison camp and rescue the kids, Tyler is seen with Stripe. It is mentioned that on the journey to the Base, that Tyler and Stripe became close friends. When the Pack leave to return to their paths, Tyler asks Stripe to come along, as Vernon did, but Stripe refuses, liking his life at the Storming Base.

Wandering Secrets: Tyler doesn't appear much, but is primarily seen with Ash, often tottering after him. When the Jackal Squad's leader threatens Samson after killing Ingram, Ash and Tyler try to intervene, but are threatened as well. However, when he decides to let Samson live, he threatens to kill the Wolf's family if he makes one wrong move, and proceeds to frighten the boys further by saying he might find use of them, and that "a child's will is easier to break than an adult's".

Tyler is very young and doesn't fight, but that did not stop Infinite(both identities) from threatening his life, as the sadistic villain has no qualms about killing innocent people.

Like many young children, Tyler loves his parents, and he admires his father as the leader of the Pack.

Ash is Tyler's older brother, and is rarely seen away from him, with the exception of Ash's kidnapping and self-imposed exile.

As seen in Wamdering Secrets, Tyler and Ash always hung out with Benji during the apprentice's spare time.

Despite only recently meeting the Red Gate City native, Tyler became fast friends with the traumatized pup. When the Wandering Wolf Pack were leaving to return to their well-worn paths, Tyler asked Stripe to come along, but he refused, because he loved training as a warrior (and because Martin still lived in Hedgehog Village).

Retrieved from "https://sonicfanon.fandom.com/wiki/Tyler_the_Wolf_(Burpy%27s_Dream)?oldid=1819414"
Community content is available under CC-BY-SA unless otherwise noted.