Ty the Thylacine (prefers "Ty the Tasmanian Tiger") is a Mobian Thylacine hailing from Downunda. He is a crossover character, based on the video-game character of the same name.

Ty is proud of his Downundan heritage, and speaks with a thick (but understandable) Downundan accent. While many would praise Ty's abilities and reputation, Ty himself is rather humble about all of it, but nonetheless sure of himself. However, he can get somewhat tongue-tied when around his girlfriend Shazza. Ty bears a great amount of responsibility as a member of the Downunda Freedom Fighters, and primary protector of Southern Savannah.

Ty is a golden yellow Mobian thylacine, who wears red-brown shorts, coupled with a belt with big pockets attached (presumably for his boomerangs). In addition, he wears brown fingerless gloves with metal plates on the back and the first joints of his fingers (save his thumb). Ty has brown stripes on his back, and his tail-tip is brown as well. He has green eyes, three bangs of hair (with the front one being rather long), and a red-brown nose. One of his most noticeable aspects is the bright yellow band-aid on his muzzle. Unlike most Mobians, Ty goes completely barefoot.

Ty is an experienced fighter, and knows how to handle himself in a fight. In addition, he is fast and agile, able to smoothly navigate rugged terrain and thick jungles. However, the two things that make Ty especially dangerous are his incredibly strong bite, and his numerous boomerangs, all of which come with unique special effects.

Bunyips are giant mechs, with several models having specific purposes. Ty and his brother Sly use these Bunyips when they need to get a specific purpose done, and can't do it with their own power alone, calling in the heavy-duty Bunyips for extra firepower.

A large red combat Bunyip, built with high-tech pistons in its arms, allowing it to throw extremely powerful punches. For additional power, it can be equipped with a "Bunyip Mortar".

A Bunyip based on the "Thermo Extreme Bunyip", but built for very opposite purposes. The Extreme Bunyip has built-in flamethrowers, satellite-guided missiles, and superheated hook-chains with can melt into and latch onto almost anything. It also has a large thruster built into its back, allowing for larger jumps.

The ultimate combat mech Bunyip, outclassed by no other. The Shadow Bunyip has powerful pulse lasers built into its arms, gravity grenades that temporarily distort gravity in its explosion radius, and a powerful energy shield. In addition, it has thrusters installed in its back, allowing for additional height and distance in jumps.

A unique Bunyip built for long-distance, high-speed air travel and dogfights. The Gunyip is equipped with several air-to-air and air-to-ground weapons, allowing the Gunyip to take on all sorts of enemies.

A Bunyip built for underwater travel. It can withstand extreme pressure, and with large oxygen containers, can stay submerged for quite some time. 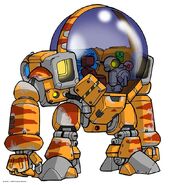 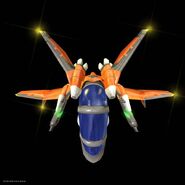 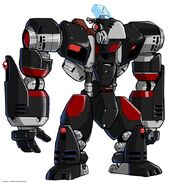