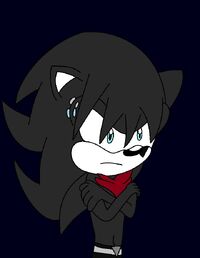 Eric Brandon "Twilight" the Hedgehog is a 15 year old black goth hedgehog, and an uneasy yet reliable ally of the Funky Town Gang. He is a the Mystic Being of Shadows and has the Shamanic abilities of communicating with the dead, and uses shadow-based attack.

Twilight was a loner who would rather keep to himself due to being depressed by his mother's murder, but became more social when Becky arrived, giving her a magic book and providing backup support. Through Becky's compassion for him, a streetwise and sensible boy has been brought out, though he still prefers being alone.

Twilight is a black hedgehog with Shadow the Hedgehog-like quills, but are totally black, and blood-red chest fur. He has light blue eyes, and bangs that hang down from his forehead. His muzzle and the inside of his ears are totally white due to vitiligo. He mainly wears gothic attire, but has two piercings in his right brow, and a triangular arrow pointing downward from his left eye.

Twilight started out being a reserved shaman who only appeared when it was necessary, making him come off as a loner, but thanks to Becky's compassion, Twilight began to reveal himself as a very kind and mature individual. He began to become more social around the gang, but he would still put his responsibilities of being a shaman before engaging in life, as he thinks it's worth more if someone else feels joy than him.

While some think he is selfish, he actually greatly pities the restless spirits he regularly monitors, and to those who had hard lives.

His personality is quite reserved, but he is actually very polite, though he is still depressed from his mother's death. He's the one who works in the shadows of the gang, providing backup support and giving them items in exchange for valuable parts of monsters they slay. He generally carries a sarcastic attitude with a low monotone voice that barely shows any emotion.

He also takes his responsibilities as a monitor of the dead seriously, as he performs excorcisms and protection ceremonies around various places. While most believe he doesn't care about the welfare of living people, he strongly disbelieves in injustice, possibly stemming from his mother's murder.

Like the rest of the gang, he has musical talent in playing bass guitar, violin, and singing.

Twilight was born the youngest son of Bluebell Evanstar with his sister Anne-Marie "Misery" Evanstar as the oldest, and they lived in Spagonia. When he was eight years old, a malfunctioned Egg Walker Robot set their house on fire after shooting Mrs. Evanstar. Misery & Twilight escaped, but became orphans that night. They were placed in the orphanage, where Ceecee Cleebo, an aspiring student of the University, adopted them. When Miss Cleebo graduated, they moved to Island Togetra in a town on the face of a mountain, where they went to the same school.

Twilight kept to himself all the time, for he secretly studied shamanism and dark magic in hopes of resurrecting his mother. He secretly accused his father of abandoning his mother to die, and wanted to know the truth to how the robot malfunctioned. He began to train himself physically and mentally, and patrol the streets of LittleTown at night. He would continue these practices for the next seven years.

Twilight houses powers of darkness that are generally used for evil purposes, but he'd rather use them for his own use. He uses a shaman's scepter for his dark powers, with his range attacks mainly consisting of Shadow Ball, Dark Wind, and Blades of Blood. He is also able to use Shadow Creep, a move which dissolves him into a shadow, allowing him to creep within the shadows to take people by surprise. He uses hand-on-hand martial arts and a machete for melle combat.

Twilight is able to teleport himself and multiple people to different areas that are just by his reach. He uses his shamanic abilities of summoning and controlling the dead to his advantage when he faces a huge variety of enemies.

He's a fairly good runner, swimmer, and fighter, though he uses his machete for close combat. He's also highly skilled in playing the violin and riding a motorcycle. He also has a streetwise demeanor with making deals and negotiations.

Twilight suffers from vitiligo on his face and in his ears, so he can't stay in the sun for very long. He remains traumatized from his parents death. He is also easily irritated by clowns, anything brightly colored, anything too happy-go-lucky, or plain annoying in general.

Retrieved from "https://sonicfanon.fandom.com/wiki/Twilight_the_Hedgehog?oldid=1792867"
Community content is available under CC-BY-SA unless otherwise noted.