Voted Most Handsome Male for Summer 2014!
This is an article about Twilight the Greater Kitsune Shadow, a character created by TwiShadow on 11/2/2013. 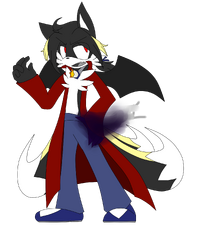 Though Twilight appears to be a normal mobian kitsune, he is really a creature called a "Shadow". This explains his unusual height, as he stands at 4' towering over a lot of vulpine mobians. He is unusually light for his height, weighing in at 77lbs, this could also be because of his species. The result of this tallness combined with his light weight makes him look very lanky, like skin and bones. Twilight also possesses a set of black, leathery wings. They look too small to be able to carry him anywhere but they actually do allow him to fly, another quirk of the shadow species. Twilight also has three very fluffy tails.

Twilight's fur is a soft charcoal black, some of his bangs have blond highlights. Blond colored fur also borders the white tips of his tails. All of his blond fur looks as if it were bleached, not natural. Twilight's bangs hang over his white muzzle very slightly, the rest of his hair is tied back in a ponytail with a lavender colored ribbon.

Though Twilight does not have any notable markings when his body is covered by his clothes, he does have a strange marking on his back that looks like a crescent moon with a star in the middle. It is colored white. Twilight also has what looks to be a deformed hand. Well, it's different from the rest of his body, it doesn't look like it should be there. It is a deep purple color, and is always clawed. It looks and feels scaly, and is always surrounded by a dark aura.

Twilight wears a dark red trench coat that runs all the way down to his ankles. He also wears faded jeans with two black straps hanging off the sides where the pockets would be. In addition to this, he also wears sneakers that are a bold blue color with white markings on the top.

An emblem hangs around his neck on a black strap. Half of if looks like a sun, and the other half is a moon. These jewels look unnaturally combined. The sun half glows in the daylight, and the moon half glows at night.

At first glance, Twilight appears to be an apathetic character. He doesn't seem to care that much about anything, often staying out of other people's business whenever he can happen to avoid it. He believes that most everyone is inferior to him, having a bit of a superiority complex to make up for his own faults.  Though he seems indifferent, this is because of his abnormal heart (or "core"). It seems to be malformed and has trouble keeping itself together. He often forgets the feeling of most emotions because of this. He is constantly re-learning emotions he had previously felt, and even learning new emotions he had never felt before. It becomes almost overwhelming to him sometimes, which is why he tends to stay away from people.

The feeling of all these emotions constantly being forgotten and re-learned can only be described as a sound so grating on the ears that it's almost maddening. The shadow has gotten used to the screeches and sounds inside of his head, but because of them he often gets headaches. The only way he can release all of this negative energy is through fighting, using the negative energy to enhance his own dark powers. Because of this, whenever he is around anyone he prefers to try and start fights. He still tries to avoid being around people, especially crowds, as he doesn't really like people in the first place anyhow. It is very hard to make friends with him.

(UNDER CONSTRUCTION and has been for the past 2-3 years...)

Twilight's small wings don't look like they can grant him much air time, but in truth they are powerful enough to carry him non-stop for about one-two hours. After that, he must rest to avoid damaging them. He isn't as skilled at flying as some, but he's still skilled enough for it to be a good method of travel.

Another species trait of Twilight's is that he is able to sink into the shadow of whomever he pleases. He has honed this ability to the point where he can slip in and out of shadow's practically undetected. He normally uses this to travel around whenever he's tired or too lazy to walk on his own. He also uses his shadow sneaking to sneak up on potential foes in the midst of battle.

All shadows have the ability to see in the dark. It wouldn't make sense if they didn't have that ability. Twilight's eyes let of a slight red glow when this ability is active. His night vision is automatically active in any darkness and allows him to see perfectly, even in pitch black darkness.

All Shadows possess some kind of umbrakinesis. A shadow's umbrakinesis is different from others however. All shadow's possess a unique kind of darkness (Perhaps one shadow's darkness can come from the color of dark colored objects, while anothers would come from the bad energy of a mobian's personality). Twilight's darkness comes from negative emotions, the negative emotions of himself and of others. Really, Twilight's umbrakinesis is the physical manifestation of negative emotions. He uses his umbrakinesis to form energy blasts and bladed weapons. His usual method of attack is covering his hands in dark energy to form very long, sharp claws and using them to attack. He also covers his tails in this dark energy to form sharp blades out of his three tails.

Besides attacking with his umbrakinesis, Twilight is very fast. His top speed is currently unknown at this time. He is also extremely agile and dexterous. He cannot stay running really fast for too long as it tires him out greatly. He has above average strength, and though he isn't the strongest around he's still much stronger than he looks. His body, however, is just as frail as it looks and he's damaged easily if he manages to get hit with a semi-hard attack.

Twilight is a bit frail, his wings especially. If his wings are damaged then he, obviously, will not be able to fly. His wings can reform over time but it takes a long time.

Though Twilight is immortal, his one glaring weakness is his heart ("core"). If his heart is destroyed, he is completely wiped out from existance. He cannot reform his heart. Once it is gone, he is dead. Better yet, it's as if he never even existed in the first place.

Twilight can conjure dark energy whenever he wants to, but it is weak in the light. Though it is not that weakened in normal daylight due to the emblem that hangs around his neck, it is only around 1/4 of it's strength in abnormally strong light.

Twilight cannot utilize chaos energy, in fact it is the one thing that is poisonous to him. (Chaos Energy is poison to all Shadows.)

It is currently unknown how Twilight changes into this form. In this form, Twilight is able to tap into all of his dark powers, unleashing every bit of negativity that is inside of him. He is fully aware of what he is doing in this state, however. His dark powers become incredibly strong and aren't even weakened in light in this form. It is very dangerous for Twilight to stay in this form for too long, as it eats away at his energy at a rapid pace. He could eventually lose control of himself and the power of the form could eat away at his heart, eventually destroying it completely.

Twilight attains this form from an abnormally large amount of negative energy flowing into his body. He cannot keep control of the flow and has to release it in a burst of energy. Though this is useful in battle, it can cause him to hurt people he may not want to hurt. He is semi-out of control of his body in this state but he can see and hear and is aware of everything he's doing, he just cannot control his physical body himself because the darkness drove it out of control. In this state, his body is just trying to return to homeostasis.

Lilac Hunter- These two have been friends for a few years ever since Lilac "saved" Twilight from "starving to death" outside while he was wandering the streets, cold and alone. Though Twilight was never in any danger of dying due to his immortality, she thought she was saving him at the time. This allowed the two to get to know each other a little bit and they've been friends ever since. Lilac knows about Twilight's struggles and doesn't let herself get too angry with him over things that would normally make her angry with other people because of it.

Sol Hunter- Lilac's little brother. Twilight is okay with Sol, but doesn't like him that much for the simple fact that he is a child and Twilight is not fond of children. He feels obligated to protect Sol and watch over him, however.

(None at the moment)

(None at the moment) 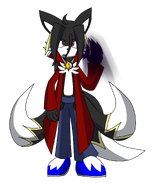 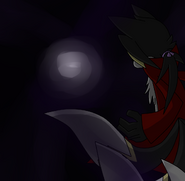 Another old one but why not 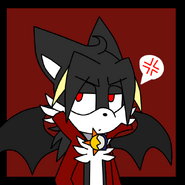 Retrieved from "https://sonicfanon.fandom.com/wiki/Twilight_the_Greater_Kitsune_Shadow?oldid=1799726"
Community content is available under CC-BY-SA unless otherwise noted.