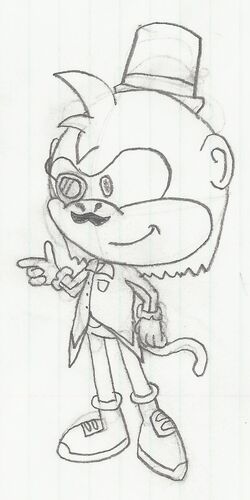 Thomas T. Turpin (also known as Turpin the Monkey) is a character created by Macintosh. He was intended to be an original Sonic character, in which Macintosh wants to show that there is more to create a Sonic fan character than just a hedgehog, fox or echidna (in other words: Think outside the box).

He has brown fur, has brown eyes, and has a mustache on his muzzle. He wears a top hat with a black jacket with blue stripes. He also wears a monocle with a pair of blue boots.

His characteristics are based on British stereotpyes. He is a bit of a snob who loves to drink teas and have tea parties.

When he was a young boy, he was adopted by British resident Tolken the Eagle, and that's where he got his British stereotype attitude.

Retrieved from "https://sonicfanon.fandom.com/wiki/Turpin_the_Monkey?oldid=1647420"
Community content is available under CC-BY-SA unless otherwise noted.