The author of Tsubomi the Cat Hybrid considers this page to be unfinished. As such, some sections may change. 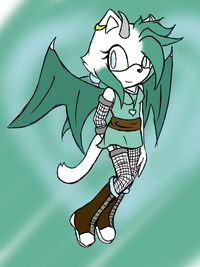 Tsubomi is thin and rather short, as she stands at 3' 3". Tsubomi also has rather long legs,  Tsubomi has stark white fur, along with light teal hair that is pulled back in a low ponytail. She has bangs that are choppy and uneven, and are seperated into three strands that cover her left eye. She also has a loose strand of hair that covers part of her left cheek and ends at her chest. Tsubomi also has a long, white cat tail, and she also has leathery dragon wings that are teal in color. Tsubomi has light blue eyes, and she has short swirly dragon horns that a are a grey in color.

Tsubomi normally wears a short pastel teal dress that ends at her thighs. She often wears a rather thick brown belt. She also wears fishnet stockings, along with boots that end a few inches before her knee. Her boots have heels that are about an inch in height, giving her an extra inch in height. They have grey laces running along them. The boots are a dark brown in color. Also, on her right ear, Tsubomi has a golden earring. Tsubomi also often accesorizes with a heart necklace, but the heart is blue instead of a normal red.

When first approached, Tsubomi can seem rather calm and a bit unwelcoming at first, but she tries to be kind at times. She is also extremely polite to people older than her, and the same goes with strangers. She occasionally offers a helping hand to people she doesn't know, although she can sometimes be too nervous to do so. Tsubomi does enjoy helping others, and she attempts to be kind at most opportunities given to her. Tsubomi is also rather apologetic, and will often apologize several times.

Tsubomi is also known to ramble quite often, or have odd and quirky behavior. She is also extremely over-emotional and sensitive. Tsubomi is also not really one to hold grudges, but she does have strong opinions that are difficult to unseed. She can also be rather stubborn, refusing to believe certain things, whether it be about other people, or herself. She is also not one to really get angry easily, and when she is angered, she will bottle it up most of the time. Tsubomi is also rather introverted, and she prefers spending her time alone, but she hates being lonely.

Tsubomi is also a bit sarcastic when she is comfortable with others, though she isn't always this way. She is often very scatter-brained, and she will occasionally make an idiotic comment or repeat herself even though she might have already stated something. With being scatter-brained, she is also very forgetful. She is known to get bored rather easily, finding most things someone would find fun boring. She is also a creative individual who loves to draw, listen to music, or write.

She also lacks a lot of self-confidence about herself, though she will mostly never admit this. She is also a rather anxious individual, often worrying about the future and what it will bring for her. Tsubomi is also mildly paranoid, and she suffers from fears of loneliness. She also will occasionally think that everyone is out to get her in a way, and she often views the world in a pessimistic and cynical way. Tsubomi also tries to give good advice, but it can be mostly corny. She is also known to make a mature comment here or there. Tsubomi also likes looking behind the meaning of most things, whether it be songs, her dreams, or books.

Psychometry- Tsubomi can learn an object’s history by touching it, and she can learn another person’s memories and thoughts by touching them. She can also do the same thing with corpses, though she prefers not to touch the deceased.

Cryostasis- Tsubomi has the ability to freeze cells, whole tissues by using chemical reactivity to prevent them from being damaged. At a low enough temperature, any chemical activity which might cause damage is stopped. If Tsubomi were to put herself in a state of cryostasis, she would be unable to get herself out. She would have to be exposed to high enough temperatures to thaw her body.

Cryokinesis- Tsubomi has the ability to manipulate ice and create constructs out of it. She can also freeze anything to an atomic level, causing it to be fragile. She can also induce severe frostbites that cannot be repaired by normal means. Her ability to create ice is based upon how much moisture in the air. She will not be able to use this power in an area with little to no moisture in the air. All of the ice Tsubomi manipulates and creates is vulnerable to heat, just like normal ice. It is also very hard for Tsubomi to harness this power in high temperatures.

Frigokinesis- Tsubomi also has the ability to manipulate snow, and she can create blizzards and even move snow around at her will.

Enhanced Durability- Tsubomi can sustain many blows and injuries before she is extremely affected. This also depends on what weapons her opponents or attackers are using, and it depends on how strong they are. Tsubomi will often take on attacks, and feel the effects of them later on.

Enhanced Strength- Tsubomi is capable of lifting many times her body weight. However, she may stronger than a normal individual, but she does not possess super strength and her strength is a bit limited.

Start a Discussion Discussions about Tsubomi the Cat Hybrid