Frozen Scorpio, the author of Trixie modraC, considers this page to be unfinished. As such, some sections may change.

This is an article about Trixie modraC, a character created by Frozen Scorpio on 03/28/2015. 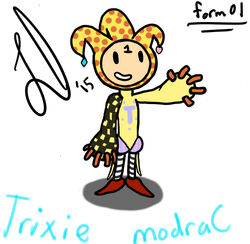 Trixie has two main forms that she takes. The similarities between the two lie mainly in the clothing. Her outfit consists of a three-pronged yellow and red jester-hat with small symbols at the edges (one heart, one club, one diamond,) a skin-tight yellow acrobatic outfit with thick sleeves of similar color (but the right sleeve has a checkerboard pattern with a yellowish black color as the main color), large/overly-exaggerated blue/pink vertically-striped court-jester pants (the ones that look like 2 large spheres covering one's hip-area,) black and white horizontal-striped stockings and reddish-orange, jagged shoes that go inwards the further away they go. Her skin is a light shade of pinkish-white and from her pants extends a white-haired tail often wrapped around a large yellow ring. A huge circle on the back of her clothing is cut open, revealing a dark hole on her back with a jagged, almost rectangular skin-pattern circling it.

As stated before, both forms have seperate designs to them. Although the clothing is similar, her height and physical development change with both forms, with the first being much smaller (almost childlike) while the other is much more matured and overall developed. Her face is marked with a cyan number that changes with the more people she absorbs, which also affects her physical development. Her younger form has small bits of blonde hair poking out from her hat, while her older form has her hair much longer, drooping below her shoulders, as well as brushed behind them, and her clothes change a bit as well, as they resize to fit her new form and her pants become more vertical diamond-shaped rather than spherical. There is a half-form in between the two, which is simply what one would expect, that being a pre-teenage form which she gains after absorbing around 500 souls.

Trixie is really one to question. In both of her forms, Trixie tries to play herself off as innocent, whether it being twisting a scenario into her favor or flat-out lying to get where she needs to be. Her younger form is much more deceptive, however, as her physical form often convinces people that what she's saying is correct. Speaking of her younger form, Trixie is also generally more active when in her younger form, always leaping from place to place while her older form is more calm and still, though also more aggressive. When in her older form, Trixie is also more arrogant and self-absorbed, often believing her opponents to be lesser than her. Despite that, she's actually a cery deep inner-calculator, always planning moves miles ahead of when they need to be executed and can easily change things up when her opponents gain the upper hand. This is mostly seen whenever playing any card-game against her, as she always holds the very best ones for when her opponent is open to attack, while sending out lesser cards as bait to throw off an opponent's strategy.

Trixie's history is overall unknown. Nobody knows whether she was recently born or even how old she really is. She just showed up one day in the String Carnival, quickly figured out what was going on, aksed if she could join in, and after demonstrating all that she could possibly do to improve their harvests, was added as a member of the String Paradise, as well as becoming a high-ranking member of the Void Ensemble.

Events of the EQuartz Committee: Season 3

Though still not having a backstory, Trixie does have a prominent role as a minor villain in season 3. She first appears in a card-game tournament in her younger form, luring people she defeated away from sight to turn them into cards and absorb them. She is almost seen by Willow Infiern, but was gone when she went to check. Trixie later appears in a Regionals tournament doing the same thing, though by then had absorbed 732 other players beforehand and a total of 746 afterwards. Here, she begins calling people she faces by the number after the one on her face, as if she already knew she would win and absorb them, giving her no real meaning to memorize their name. This time, both Willow and Bonesy find out, only for nobody (save for Jared and Twitch) believing them based on comparisons between Willow's win-rate and Trixie's, making them believe that she is simply jealous.

Trixie appears in a Worldwide tournament later on, having then absorbed a total of 1095 other players. Here, she competes in a tag-team alongside a masked man named Mr. F, who doesn't speak or ever show even a small piece of skin. After defeating her 1110th and 1111th opponents in round 8, she just absorbs the two while on-stage for the entire world to see, seeing no reason to continue the facade for any longer. Mr. F is also revealed to be a fake, having been a magic puppet created by Mr. Strings to aid her by controlling it from the String Carnival. Willow and Jared face her in a 2-on-1 tag-team match in the finals, at first being monumentously overwhelmed by her stall and burn combination strategies. They eventually pull through, causing the number on her face to rapidly decrease to zero, where her body then breaks down into cards containing all players she had previously defeated, whom are then returned to where they were defeated and freed from their imprisonment, leaving nothing of her existence behind.

Trixie appears again in the String Carnival to face Willow for the last time. Here, Trixie's number pattern on her face is completely gone and the hole in her back sealed, indicating that she no longer has a use for it and also has no need to absorb other players. At first, the two are at a constant stand-still, with neither one getting the upper hand for long before the other counterattacks, but then, with just the right combination of cards, Trixie quickly reduces Willow's field to just one available zone, destroying both of their on-field cards. Trixie then plays the most powerful card in the game, Blank Card, allowing her to exchange both of their life-points for the card's strength, leaving both players at just one point left. Willow, out of options, gambles her fate on the next draw, which pulls through in the form of a low-level damaging spell, which she then plays and reduces Trixie's points to zero, defeating her once more, though this time just knocking her unconscious and releasing her locks on the door to Mr. Strings' Tent.

Trixie appears once more after Mr. Strings' defeat and betrayal from the rest of the Void Ensemble, at first helping him fight back against Xahlia and her forces before being quickly overwhelmed by Maxie and Shining Raymundo, then rendered incapable of fighting. She, along with Kyoyan, Bogo, and several Shabies follow the EQuartz groups through the inter-space portal, having to leave Mr. Strings behind to die by his request. The escaped String Paradise members are admitted as temporary EQuartz members and are given shelter in Soulstice City, having seen the error of their ways and wishing to reform.

Just before Xahlia was about to destroy the EQuartz members who had come to defeat her (Lead protagonists, Gretchen, Éloise, Hoyori, Pixel, Tomoe, and a reformed Shining Raymundo) Trixie plays a special shield card to block the attack, while also distracting her while Bogo pins her down and Kyoyan comes in for a quick attack, cutting her left arm off. They join EQuartz in the fight against the queen of chaos, ultmately winning in the end. They appear once more in the final battle against Sartorius Vhan, aiding in fighting off the Fasins as well as dealing part of the finishing blow to Sartorius. In the aftermath episode, Trixie is seen performing in a big-top carnival and later rematching Willow and Jared towards the end, as well as posing with the rest of EQuartz Industries in the finale photo.

Trixie has a bit of a strange type of magic. Rather than directly manipulating any element or some kind of kinesis, she instead possesses multiple types of image-manipulation. While being a horrible artist on her own, Trixie instead can control art in ways not possible before, from altering a work without touching it to even bringing art to life. This power is often used with her weapon of choice, those being regular trading cards. She also possesses the power to transform people into inanimate objects, and can reverse this affect if need be. Trixie uses this to turn anyone she defeats into a card, insert them into the hole on her back, and practically absorb them, growing stronger with each one, as well as changing the number on her face.

As she grows stronger, Trixie becomes able to use a few of the powers commonly held by those she absorbed, the strength of those depending on how many people with that power she has absorbed, and upon reaching 1111 absorbed souls, evolves into her older form. One other power that Trixie holds is that she can control the ring she carries around to either float, spin, and even charge at opponents.

Trixie, sometime during her past, had learned an advanced level of acrobatics. She can swing from pretty much any ledge and land wherever she pleases. Trixie can also manipulate the muscles in her tail so that they move in whatever direction she wants it to, allowing her to grab objects with it. She uses this mainly with her ring, which she does to passively hang and swing from it.

Trixie does have a few weaknesses that one can exploit for an easy win. She has somewhat poor eyesight, preventing her from seeing far away or in both darkness and extreme lighting. One with light-manipulation can use this to prevent her from seeing exactly what cards she has and mess up her strategy somewhat, also buying some time for one to plan ahead while she adjusts to this. This also gives her quite a weakness to long-range fighters such as snipers, as long as one can keep her in one place and prevent her from exploiting her acrobatic-dodges. The hole on her back is also a major weakness, as one can just reach in and pull cards out of her until she reaches a weak enough state to defeat. When she loses even once in a game, all soul-cards she's collected are expulged from her body, leaving her at zero cards and zero strength.