Start a Wiki
This is an article about Trivia the Hedgehog, a character created by Clairebear165 on 10/29/2016. 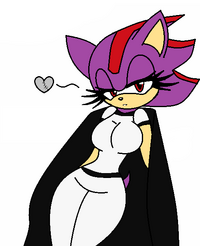 Trivia is a purple-furred hedgehog with red streaks in her gravity-defying quills. Her muzzle, arms, the inside of her ears, and chest are beige. Trivia's eyes are scarlet-red, the same shade of red as her quills. The only visual difference between Trivia and Hecate is Trivia's attire. She wears a white t-shirt and leggings, a large, black-hooded cloak, and white shoes with a black cross on the front. The soles are also the same shade of black.

Trivia's personality is the opposite of Hecate's. While Hecate is calm, quirky, and positive, Trivia is spiteful, abrasive, and has temper issues. Though, she is calm most of the time, she does break easily. Trivia isn't very social but she does have respect for some. Trivia is loyal to her boss, Varusa D'Era, claiming that she would never betray him, though, this trust was broken when she decided to stay with Finitevus.

Trivia, like Hecate, can read other people's minds. It depends on the person's intelligence whether or not they can block Trivia from reading their mind.

Trivia can create anything she wants out of the purple energy she is able to control. The only limit to this power is the user's imagination.

Trivia, like Hecate, can shapeshift into anyone she sees. Though, she can only hold said form for a limited amount of time.

Trivia, like Hecate, is able to sense other's emotions.

Trivia cannot read one's mind if they have a Aetherstone. She is weak too fire and ice attacks. She lacks in physical strength.

Retrieved from "https://sonicfanon.fandom.com/wiki/Trivia_the_Hedgehog?oldid=1828543"
Community content is available under CC-BY-SA unless otherwise noted.