Start a Wiki
This is an article about Trip the Mouse, a character created by Frozen Scorpio on 01/1/2015. 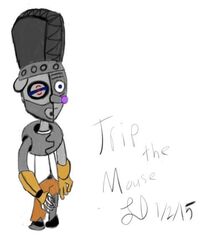 An old mouse who had survived a terrible disease by way of self-roboticization. Flip is a surgeon you would probably want to go to as a last resort, as his methods are known to be very... drastic.

Trip takes the appearance of a cyborg mouse with pale gray fur. For his organic parts,His eyes are blue and have large dark rings along the lower half of each. Trip's outfit of choice is a standard labcoat with lime-green undershirt and brown pants. His left arm, for the most part, is fairly normal and free of machinery, as is the entirety of his right leg save for his foot. The mid-to-low sections of his chest are clean as well.

Half of his face is covered by an iron mask with basic facial features resembling those of a Shakoki Dogu, and is connected to a massive pair of closed steel jaws that form a large colorless dome, as well as wiring on his arms (which end at the shoulder on his right arm and go straight to the hand on his left.) Keeping it all together is a steel band around the top-portion of his head held tight by several massive screws, which covers a small part of his eyes, and has small portions of hair extending slightly below. Covering his wrists and part of his arms are large ovular orbs with a thin vertical line cutting through, ending in a small black glove with sharp fingers. The upper portion of Trip's torso is concealed by a small metal sphere with a closing line in a somewhat-zigzag pattern. The higher half of his left leg is also mechanical, being a basic outline base with two thin flexible sheets of metal inside.

Trip is not a shy person, but just prefers to keep to himself. When alone, Trip has ideas about future machines to build or ways to massively improve on older models. Trip is one who hates experimenting, and prefers to get things done the first time or will feel very frustrated in the case of failure. He is also not one for jokes, and is overall very serious and stuck-up about his work. Rather than fighting directly, Trip is one to scope out the opponent and attack one's weak-spots to win.

Most of Trip's life was fairly normal. He lived a stable life and aspired to be both a mechanic and a medical surgeon. Nothing much ever happened of real severity until he was about 30, where, after having started work on a special project, he would come down with a rare disease, one that very few who suffered through it survived, and those who did often lost control of various parts of his body. This would create a great stress on him to complete his project, during which he would have to constantly switch between work and checking his body for further infection. Upon completion, Trip would unveil his project, a prototype of what would eventually become the Mechandonizer, and used it to physically alter his body to remove any and all infected parts of his body, ranging from small patches of skin/flesh to entire limbs and even part of his brain.

Now in this new, cyborg state, Trip would go on to further improve his work's potential, using it to help the sick and even revive the dead, but at a cost. With most of his patients, after surgery and roboticization they would lose most of their personality and become mindless machines in semi-organic bodies, only being kept artificially alive by advanced technology that would eventually become outdated anyways, which only really delayed the inevitable. Rather than feel depressed over the results, Trip was ecstatic, having felt truly satisfied by what he was capable of doing.

Trip would eventually move on to work at EQuartz Industries after being fired from his previous job (attempting to roboticize someone who simply had a fever.) At some point, he would be the one who roboticized Yggnolan Law and made him into what he is now, create artificial, semi-intelligent life in ReKaz and MoKaz, and would also create small improvements amongst both the mechanical and medical branches of the company.

Trip can easily manipulate the machines that make up parts of his body to do a multitude of things. By removing the finger-skin on his hands, Trip can reveal five sharp syring needles which he can use to draw blood or other fluids from any source of liquid. He can pull a panel from under his headband that helps identify his opponents weak-spots and can aid in performing efficient surgery. The mechanical jaw on his head can split open and clamp closed, and can chomp down on or trap an opponent inside to deal heavy damage. Trip's most defining feature is his immense knowledge on machinery. Being that he managed to roboticize a majority of his own body by himself, it's no surprise that he is an expert in both robotics and surgery. He has done quite a bit with this, from reanimating countless frozen Crucite corpses to giving life to an empty shell.

With age, Trip's organic parts have begun to weaken as most organic beings do, and have degenerated into less of a direct fighter and having to rely more on cunning tactics and identifying weak-points in his opponents to win. Armor of any kind beyond wood can make him effectively useless beyond his steel jaw, and even then that part has very little range beyond where he stands, but can automatically activate on back-attackers.

Retrieved from "https://sonicfanon.fandom.com/wiki/Trip_the_Mouse?oldid=1676546"
Community content is available under CC-BY-SA unless otherwise noted.