Start a Wiki
This is an article about Tribute The Cat, a character created by FainTheGreatest on 06/22/2013. 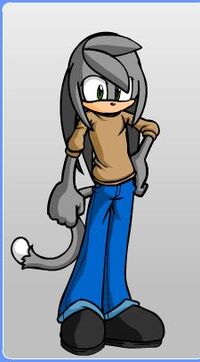 Tribute is usually happy and willing to help people he trusts. He has a large dependance on other people and tries never to be alone. (Personality will be expanded upon.)

Tribute has lived a normal life and spent most of his time reading comics and playing video games.He was often popular with people his age because of his power. On march 11th when he was 9 he came up with the name Tribute, the name came from him deciding to use his power to be "A tribute to all great heroes". After leaving school he went to Veil City University to pursue a career in acting.

Shapeshifting. His variation of shapeshifting allows him to shift into anything he's seen in his dreams or not.An interesting thing about his shapeshifting is that clothing changes with him and that each shift can only last 20 minutes.

The ability to use whoever he's copied's abilities.

Constant need of others. (More will be added.)

Retrieved from "https://sonicfanon.fandom.com/wiki/Tribute_The_Cat?oldid=1552385"
Community content is available under CC-BY-SA unless otherwise noted.