James E. Transford was born in 1875 AC into the Transford Family, a decades old crime syndicate operating throughout Westopolis and its surrounding cities. Despite the fact his parent's work demanded changing locations on a yearly, often monthy basis, the first 13 years of James' life were relatively uneventful. By this point, he began training in the use of firearms, lockpicking, mechanics, and various forms of combat, all with the expectation that he would one day replace his father as head of the Transford Family. At 18, James began service as an enforcer, spending the next two years dispatching of anyone who served as a threat to the Family's operations, before a sudden attack on a compound found him captured by GUN.

In custody, James was selected as a candidate for "Project Zhatka", a top-secret project to research and enhance a mobian's powers. With the only alternative being to face punishment for his crimes, he agreed to join and began to refer to himself as simply 'Transford the Hedgehog'. With Project Zhatka, Transford spent four years learning to use his natural abilities with Chaos and Dark energy, as well as even further improving his skills in combat. Due to the secretive nature of the project, Transford rarely had the chance to use his newfound skills in the field. After those four years, the heads of the project elected to place him into cryostasis with the intention to awaken him at a later date for a new purpose. Nothing came to fruition however and the project was shut down a whole 30 years later, leaving all of their test sites abandoned and Transford to be forgotten.

Awoken in the New World

In 1994, GUN HQ was a hacked, leaking almost all information about Project Zhatka and similar projects to the world. When it was found that all of the test sites had been abandoned, a global arms race began to recover any leftover research and tech, with most of it falling into the hands of the terrorist organization ZeroCore. In 1999, exactly one hundred years after being placed into cryostasis, Transford was found by ZeroCore and awoken. Using what else they had uncovered, ZeroCore began conducting experiments of their own on Transford at their facility in Central City, giving him a limited control over electricity and fire. Although weak on their own, they built a gauntlet for him using peices from a Restraining Glove (ironically, designed to completely prevent power usage) to amplify his new powers, although putting a severe limit on his old ones. Transford saw much more action as an agent for ZeroCore, but ultimately began making plans to escape. One Year later, as GUN was close to finding their base in Central City, ZeroCore resorted to drastic measures to remove any trace of their presence in Central City: Conducting a set of bombongs throughout the city to serve as cover for their evacuation. Transford took this as his chance to turn his back on ZeroCore, using a Chaos Blast to destroy their facility.

Transford dissapeared for a while after the incident in Central City. He spent years wandering around, attempting to adapt to the changed world, all the while reflecting on the sins of his past. As he emerged from his self imposed exile, he found himself a new home in the city of Neonopolis and a new set of friends, while still working to bring down the very powerful ZeroCore.

Transford is best distinguished by his black t-shirt, blue jeans, and brown trenchcoat. He also wears a gauntlet on his left arm (this serves to limit control of his natural powers, but also amplifies the effectiveness of the artificial ones) and a leather cast on his right arm with a blade inside that will spring out at the flip of a switch. Transford's fur is black and he wears Rocket Boots. (like Shadow's rocket shoes) He normally wears sunglasses, but he has gold pupils.

Transford can use Chaos Blast

Transford draws electricity into his hands and disperses it by touching/punching another object/person. This power is strong enough to overheat a missile.

Transford's strongest attack, he slams his fist into the ground, creating a shockwave alongside an electrical current capable of short circuiting machines.

Transford turns his hands into claws, with smaller blades forming down his arms. He is also able to create four tentacles protruding from his back made of dark energy that he can use to lift things up or to impale enemies . He is unable to normally use this ability because of his power gauntlet.

Although energy based attacks can still hurt him, he has shown to be nigh invulnerable to projectile based attacks. Given his abilities with Dark, Electric, and Fire energies, It is almost impossible to hurt him with any of these energies.

In regaurds to attacks, Transford is more easily damaged by water based attacks, although regular water does not seem to affect him. Light energy attacks can severely damage him, leaving burn marks and other potentially unhealing wounds where they strike.

In all of his appearences in the CoreVerse, Transford has been shown weilding... 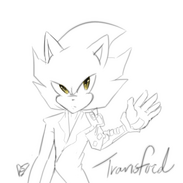 Transford with his Power Gauntlet. Credit to Silverluv for the picture.

Transford as drawn by Nitrogen 218
Add a photo to this gallery
Retrieved from "https://sonicfanon.fandom.com/wiki/Transford_the_Hedgehog?oldid=1847628"
Community content is available under CC-BY-SA unless otherwise noted.