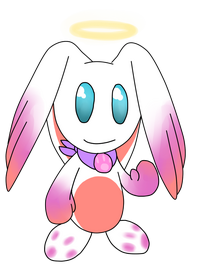 Tranquility is the smallest of the three guardians, being only 9 inches tall. She has two wing-like spines protruding from the sides of her head. They are frilled and tipped in pink highlights. These spines are flexible. She has one large, static spine protruding from the bottom of her head. It curves downward and is colored pink on the inside. Her body is small, her belly is colored pink. Her feet are tipped in dots of pink highlights. Her arms are longer, and end in mitt like hands. They are also colored with pink highlights. A small halo of light floats above her head and seems to correspond with how she's feeling.

If she's really happy or lovestruck, it will form a heart.

If she's tired, hurt or upset, it will form a kind of tornado swirl.

If she's surprised, it will form an exclaimation mark.

If she's confused or curious, it will form a question mark.

She wears a lavender band around her... neck area. On this lavender band, she also wears a strange orb. It's colored pink, with a big lighter pink dot in the middle. Three light pink ovals sit above the big dot.

Tranquility is often regarded as the nicest of the three guardians. She treats the chao living in her garden with the utmost respect and kindness, as she feels they deserve. She expects to be treated the same way, often to an extreme degree. Though she is very nice, she can lose her patience with jerks really quickly. She will not tolerate anyone being mean when she's around, and will call them out on it. She gladly puts jerks in their place.

She can be naive too, very easy to fool. She likes to think that people are good at heart, and if she witnesses an act of kindness from someone or if someone is nice to her just once then she will more often than not think they are genuinely nice people. If those people turn on her and turn out to be mean, however, she will lose her temper and go all out on them- sometimes violently if the case is that bad.

She has been described as nice all around and fun to hang out with. She definitely tries her best in her work. If there is a fight or an arguement, she will try to resolve the problem with words rather than violence. That doesn't mean she cannot hold her own in battle, however. She is the most well rounded of the guardians and can be shown to be perhaps more capable than the other two are.

Tranquility is an exceptional flier. She's a lot better than most grown up chao on the island where she lives. It's almost as if she is a natural at it- she probably is. She can fly relatively fast, and hold herself up in the air for quite some time.

Tranquility is also a very good swimmer, and is pretty fast in the water. She can keep herself going for a while, and enjoys swimming quite a bit.

While flying is the more conventional method of getting over rocky walls, Tranquility can still climb over them with little to no problem. She is nowhere near as good at climbing as Discord or Equity, however. She doesn't really like climbing all too much, but she still can scale rocky walls if need be.

While this might not seem like the most fantastic skill, Tranquility is one chao that is able to speak English. It may be because of the orb around her neck, as she gained the ability to speak normally upon acquiring it. She can also understand chao speak just fine, being a chao and all.

She knows her way around words, and is a very good speaker.

Since she is a chao, Tranquility is not really able to match up to most Mobians in terms of strength and skill. She is still very powerful for a chao, however. She is even said to be stronger than most chao on the island where she lives. Out of the three guardians, she is the most agile. Though she possesses slightly above average offensive and defensive capabilities.

Her size is a benefit to her. Since she is so agile, she can move very quickly and easily. This combination of speed and small size can make her a very hard target to hit.

Her apperance can also benefit her. Even though she really is good, being an angel chao can make her look good to those who haven't talked to her before depending on how they take appearances.

Due to her being a Chao, it can be very easy to a mobian to overpower her. She may be average in just about everything, but that's all she is. Average.

Her naivity can be a hinderance to her, as she tends to believe those who act good just once are good all around.

She has a tendency to be treated like a child due to the fact that she is a chao.

Equity the Light Chao- She can sense the good in Equity, and thus gets along with him very well. She disapproves of some of his actions as Neutral Garden Guardian, but feels he could improve if he really wants to. She doesn't mind him feeling comfortable with the way he's running things now, but it worries her sometimes. She really enjoys Equity's company, and seems to have a small crush on him.

Discord the Devil Chao- Tranquility thinks of Discord as a ruffian (which he is), and dislikes his policies a lot. She sees no good in him and refuses to try and give him a chance, as he has not given her a chance either.

Retrieved from "https://sonicfanon.fandom.com/wiki/Tranquility_the_Angel_Chao?oldid=1516282"
Community content is available under CC-BY-SA unless otherwise noted.