During the events of Sonic Adventure, Tails was flying the Tornado when it crashed, prompting him to build the Tornado 2. However, the original Tornado was rebuilt some time later. In Sonic Adventure 2, Tails built a Tornado 3, which could transform into a walker called the Cyclone. In Sonic X, Tails – along with Dr. Chuck Thorndyke – converted the Tornado 2 into a two-seater jet called the X Tornado. However, it was converted back to its original form after the Sonic crew returned to Mobius.

In Sonic Unleashed, the original Tornado makes a return. However, it may have been a copy because Tails referred to it as "My Tornado 1". The Tornado 1 also re-appeared in Sonic the Hedgehog 4. A ground-based variant known as the Tornado Racer was Tails' vehicle in Sonic & Sega All-Stars Racing. 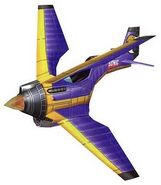 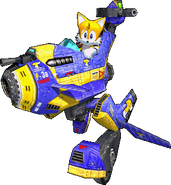 The classic Tornado reappears in Sonic the Hedgehog 4
Add a photo to this gallery
Retrieved from "https://sonicfanon.fandom.com/wiki/Tornado?oldid=1363959"
Community content is available under CC-BY-SA unless otherwise noted.