View source
This is an article about Tori the Dragon-Lioness, a character created by Dieglex on 11/28/2015. 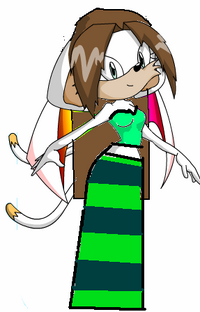 She uses a medium spring green top,a green long skirt with aquamarine stripe,and does not use shoe and socks.

Tori is considered to be nature lover, hot head, and sometimes anxious when not spying Skyward Buildings.When it is being spy, the personality has to be the opposite of normal

Amy and Tori are great friends and she knows about what's going on the world,in Sonic Unleashed Fighters,Amy accepted to join the team, forming Team Rose along with she,Cream and Marianna

She and Shadow do not get along, but one thing they have in common, they hate the Skyward Buildings enterprises,Tori and he sometimes makes some plans against Skyward Builings (including spying and gathering information)

Flame and she were friends until a certain day they were spying Skyward, when after the fight with the guards, she betrayed Tori playing outside the 17th floor of the building

Unlike her sister, Marina supports the Tori against Skyward companies, apart from that are excelent friendly (but not so close as Amy Rose, Carmine, Marlon & Diddy)

Tori see Rosabelle as a strong ally,because that Rosabelle has abilities to explore the Skyward Buildings when she is sleeping,

She does not like to hurt people, then it is likely you blackmail and threats