This is an article about Tomoe Pintura, a character created by Frozen Scorpio on 12/15/2014. 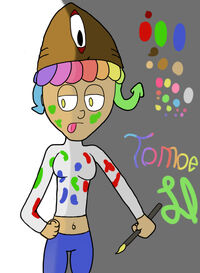 Tomoe resembles a somewhat tall, dark-skinned, and thin humanoid squid with many different-colored tentacles arranges to resemble hair, those being covered by a brown mantle that resembles a beanie, but also tends to straighten up when she is excited or... interested. Her clothing consists of a blue lanyard with a black sunglass case connected to it, a short-sleeved white t-shirt with many color splotches randomly splattered around it, somewhat scuffed jeans (mainly at the knees and end) and brown boots. Her tentacles constantly shift color based either on emotion, amount of lighting, and many other variables. She also has freckles dotted around the lower-half of her face, but mostly on her cheeks.

Tomoe leans more to a jerkish side, but not exactly too far. She simply acts as a minor bully to most, as she considers most people to be pushovers with not much to their lives. Around such people, she tends to speak in a more condescending tone than normal. Even when amongst allies, Tomoe is somewhat of a cynic and often pays very little attention to what's going on, always thinking that anything not involving her art or her friends is a pointless waste of her time.

In her youth, Tomoe lived on a beach in the cave of a cliff. While swimming in the shallow waters, she would collect anything that stuck out in her eyes, these mostly being shells and minor treasures. Tomoe loved colors, and would always practice painting whenever she could. She often looked to an island far off from where she was for inspiration, occasionally catching glimpses of bizarre, interesting Crucites that would fly to and from the island. Tomoe hung out with only a few of the local children, as the rest saw her as nothing more than a bully that picked on them just to make herself feel better.

After her metamorphosis, Tomoe had gained the generic small body most Crucites do, but now had hairlike tentacles and constantly half-open eyes, as if always having a bored expression on her face. It was around this time that she had met a new face, another Crucite child named Pixel who looked to be a singer one day and was intrigued by Tomoe's art. Tomoe took this with a grain of salt, and jokingly decided to challenge her to see who could amaze the most people with their powers. Tomoe's attention to detail and Pixel's ability to remain consistently pitch-perfect kept the two evenly matched, resulting in constant ties between each other and sparking a rivalry between them.

As time passed and more ties occured, a bond began to form between Tomoe and Pixel that only grew with each passing competition. By the time the two were ready to move away from their old homes, they were almost considered young prodigees in their respective fields. When the time came to leave, Tomoe and Pixel ended up moving to the island the two often looked off to for inspiration, and started life their together. There they were happy, now being amongst the beauty they once only dreamed of seeing closely.

Years later, an adult Crucite from another planet had arrived to begin study of the Crucites throughout this planet, which he had completed in a short time. Before leaving, this man had decided to randomly pick a small group of natives to bring along with him to the next planet. Among these people, Tomoe and Pixel were both chosen. Once boarding and leaving their home planet behind, all passengers of the ship were put to rest, using a special method that would make the two-year voyage seem only like a brief moment.

Once arriving on Mobius, both Tomoe and Pixel had bid their farewell's to the others and set off into this new world to start a living together. At first, they would live an average life, raking in enough money to maintain shelter and food, but not much else. The two would make the most of what they had however, and would try their hardest to improve upon what they already knew. One day, when sales were running somewhat low, the two were approached by a violet Crucite that they never seen before, who was impressed by their art and decided to give them the chance of entering a contest to obtain positions at EQuartz Industries. From them on, Tomoe practiced her paintings, constantly trying to improve upon what she already thought was great.

The day of the competition had eventually arrived, and Tomoe would hurry off to the Art contest. Among her were artists from all over the planet, with varying levels of skill and experience behind them. Despite her best efforts, Pixel simply did not rank high enough for the position, only placing 7th out of 94 possible rankings. She did however obtain a large sum of money and a tablet for digital drawing (which she ended up never using,) but no job. Tomoe, not wanting to be a burden on Pixel, had decided that she must go and search elsewhere for opportunity in her field, and after a tearful farewell was off to another path on the grand line of life.

Soon afterwards, she eventually entered another art contest being held by MakoCorp. Here, she would use the sorrow from her farewell in her art to create a true wonder. This had gotten her a higher ranking than her attempt with EQuartz, here placing 3rd and securing a job as a result of her talents. After such a long time of practicing had payed off, Tomoe was happy once more. As time would pass, she evolved to her final form, the one she had right now, and would even meet up with Pixel once more, having also evolved in the same timespan, thus concluding Tomoe's history... for now.

Tomoe has the unique power to shoot different types of paint from her tentacles for a plethora of varying effects depending on the color of paint. With it she can set up various kinds of entry hazards and field-effects. These include:

With her paint she can also generate patterns that affect those who touch it based on color. These include:

Tomoe can also extend her tentacles to grab objects and constrict/jab opponents. This can reach a pretty long range, so avoiding it is going to be somewhat of a problem.

Tomoe is a skilled artist, specifically in the field of painting. Whether it's scenery or a singular person, Tomoe can capture the vision of what she wants to paint and do so with great ease. Her paintings have become so popular that many are willing to now pay high prices for commissions of themselves, and auctions of her art tend to end in the high hundred-thousands. She's also an adept swimmer, capable of gliding through deep waters with great grace.

As her abilities mostly revolve around paint and colors, anything that can remove either of these can easily counter her. Water is a good counter to her powers, and anything that changes the landscape works as well. Her tentacles, when extended, can be cut and will grow back, but the time between then is simply too much for the average length of a fight.

Retrieved from "https://sonicfanon.fandom.com/wiki/Tomoe_Pintura?oldid=1691442"
Community content is available under CC-BY-SA unless otherwise noted.