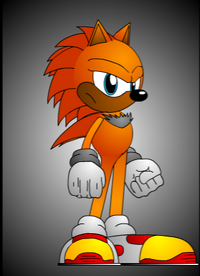 Tobian is an orange male hedgehog, He is very tall and. He has multiple spines on the back of his head and long back spines and blue eyes. He has gray wrist rings along with his white gloves. He wears white shoes with a red and yellow pattern.

Tobian has a hardworking and strict personality. He prefers to hunt out in the wild alone and doesn't trust anyone unless he knows there super trustworthy. While working with people he does whatever he can to protect them, Even going has far to harm others. He rarely shows any kind of humor and is super serious.

He was born and grew up in a loving family in a poor village, he lived in peace until he was about 6 years old, but at that point, life changed drastically. His village was attacked by By an ancient army of demons long ago. The demons attacked his home and murdered his family. Shortly after this Tobian begin hunting to survive and grew up in the wilderness. While there he met a friendly tiger that he took as his own. One day the tiger was killed by a group of hunters trying to get his meat. Furious Tobian killed the hunters. And later mourned the loss of his tiger. He still is out in Tribal forest hunting to survive. His current goal is to find the seven chaos emeralds in the hope they will resurrect his tiger and family.

Retrieved from "https://sonicfanon.fandom.com/wiki/Tobian_The_Hedgehog?oldid=1851783"
Community content is available under CC-BY-SA unless otherwise noted.