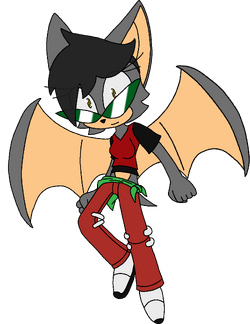 Tina Dante the Bat was originally supposed to be a dramatic, lovesick thief, back in the days when the Mystic series was just starting. However, those days have changed - now, Tina has developed, and is an important character in the series. For more information on Tina, keep reading!

Tina is a grey-furred had with a tan-like skin color that you can see inside her ears, muzzle, and wings. She stands at 4'0", and weighs 92 pounds. Tina has a very slim figure, which she gets partly from exercise and partly because she was simply born that way. Tina has yellow eyes and black hair that just seems to be everywhere. Some of it covers her right eye, while some of it spikes into the air. She also has an extremely short tail.

Clothing-wise, Tina wears a red and black-colored shirt that says "OTAKU" in small, capital bold letters While the chest area is red, the stomach and the sleeves are all black. Tina also wears small, green glasses because of her poor eyesight, along with long, pink pants and black and white shoes.

While many people are different depending on whether they're around strangers or friends, Tina takes this to a whole 'nother level. If she doesn't know somebody, she is very awkward, and she tries to relate to them as much as possible. This can make her seem much more like a socially awkward teenager, as she simply doesn't know what to say. However, she is really only like this if she has to say something - if not, she'll most likely retreat to her phone.

Around her friends, Tina is very warm and social, and though she's not one to lead a conversation, she is definitely one to join one. A large part of this is because she sees most of her friends like siblings, which is an experience she wants to treasure due to being born an only child. She puts a lot of trust in those she surrounds herself with, and it shows in how she treats them.

Tina is also very loyal, and isn't one to betray her friends. She very much tries not to make promises she know she probably won't keep, and when she does something wrong, she'll apologize relentlessly. However, Tina hates people with stuck-up attitudes and god complexes, and they are one of the things that make her legitimately mad.

Tina, however, is a pushover. A huge one. She doesn't often stand up for herself, even though she can pretty easily stand up for others.

Christina Mori Dante the Bat was born to her father Angelo Dante the Bat and Serena Dante the Bat as an only child. As a youngling, Tina was always into reading, and she was a generally normal (if clumsy) kid. When she got to preschool, however, her teachers started to notice something - Tina was always tripping, bumping into objects, and her answers were always written in random directions. Her parents didn't waste any time to realize that Tina's bat genes were messing up her eyesight, and they got her glasses.

However, things weren't always too perfect for Tina. Her father Angelo was a soldier, so most of the time, it was just her mother and her. Tina was lonely a lot of the time, and being a kid, she just wanted someone to play with. Her wish was granted when she started kindergarten, but that's when she realized that you must be careful what you wish for.

When Tina started elementary school, she was very nervous. Not only did she switch from three days of school a week to five, none of her friends went to this elementary! Tina was very scared she was going to be a friendless freak the first two weeks, but then, she met a white-furred boy named Alban Ainekas. Telling him she'd just call him White, the two clicked off immediately, due to White's warmness and friendliness and Tina's loyalty and care.

As Tina grew up, she was similar to many people who go through school - she had to deal with bullies, grades, and popularity contests. Sports was something that Tina liked a lot - not only did it allow her to have a social life, it was just something she enjoyed doing. When White got in his car crash, she supported him along the path, always trying to keep his spirit up.

Being a bat, Tina has some natural abilities. For example, she can see perfectly in the dark, which can allow her to be fairly stealthy. She also has echolocation, which allows her to be able to sense things if they make noise. However, she is still a bat, so she has poor eyesight.

Tina is a skilled dancer, having taken ballet classes since she was 6. She's also very good at flying as a result of always trying as a child. Due to her father being a soldier, when she was older, he taught her how to use a couple of guns in the right way, even giving her a souvenir gun that she now utilizes with skill. Tina is also good at flying, being a bat.

Also, Tina doesn't know she has this ability, but in dire circumstances when she is in fear, she can manipulate sound, usually manifesting in the form of a sonic scream. Tina isn't close to mastering this ability, but it's sure to rattle whoever her opponent is up!

Tina done by Jessykosis on the SFCW, thank you!

A team picture of White, Tina and Sephtis together by Xoph! Noice!
Add a photo to this gallery

Retrieved from "https://sonicfanon.fandom.com/wiki/Tina_the_Bat?oldid=1872304"
Community content is available under CC-BY-SA unless otherwise noted.