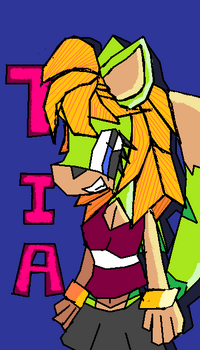 "I'm fat?Just fat?I always thought I was bigger than that."~ One of Tia's jokes

At first glance Tia appears to be a simple valley girl who likes shopping and clothes,however she's more than that.Tia is a con artist who takes the money of unexpecting men and woman who buy into her "acts".She's  also a very comedic woman and will self-deprecates herself either to get people to laugh or piss people off.Even further beneath her comedic side is her stoic side.Her stoic side may be the reason she does not care for what she is doing.

Tia was born to Christian and Natasha Hedgefox and is their first born child.Her looks and personality are from her mothers side and her intelligence is from her father's side.Even though Natasha always wanted a daughter,she seemed not to care for Tia.Tia was forced to grow up with no mother by her side and only her father.Until one day Tia's brother,Gib, was born,then her father was only interest in her brother.Tia then got a surragote parent from technology and the old man from the convenience store down the street.The old man from the convenience store taught Tia everything she needed to know about being a con artist.Eventually the old man would die and the store was tooken over by his granchildren,Mark and Kathrine Dugan the Shadowhogs.Mark and Kathrine were actually the shadows of Tia and Gib(Mark being the shadow of Tia,Kathrine being the shadow of Gib).Mark and Kathrine would often make fun of Tia,until one day she started using self-deprecation on herself,which pissed the two off.One day her mother and father finally kicked Gib and Tia out of the house and the two had to care for themselves.The two currently roam cities and towns conning people of money.

Tia has a crush on Larry even though he's a casnnova.Larry constanly flirts with Tia and often helps her out with her conning as long as he gets money afterwards.Tia follows Larry around when both are in the same city.

Despite Gib being Tia's brother,she doesn't care for him much.Gib acts like Tia is his mother ever since his real mother abandoned them.Tia would abandon her brother,but that would mess up her brother's life even more.

While Chrisitian sent Tia off with Gib,she still views him as netural instead of an enemy.He sometimes visits the two when they're in Liberty City and gives them food and money.

Mark Dugan is the shadow version of Tia.Tia hates Mark,but not as much as her mother.Mark made it his mission in life to mess with Tia,but Tia still has a slight crush on him.

Kathrine Dugan is the shadow version of Gib,Tia's brother.Like Mark,Tia hates her.She the less annoying of the siblings,but still bugs Gib and Tia.

Natasha is the mother of Tia.Tia views her mother as an enemy because she believes she abandoned her and her brother.It is unknown if her mother hates her or not.

"Could you spare some change for to poor children?"~Tia conning people

Tia's only weapon is a knife

Tia is more vunerable pyshically than mentally and emotionally

Retrieved from "https://sonicfanon.fandom.com/wiki/Tia_the_Hedgefox?oldid=1517039"
Community content is available under CC-BY-SA unless otherwise noted.