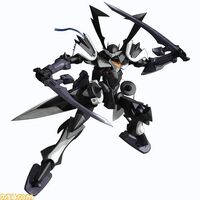 Thunder Lynx is a powerful Plasmian Warrior and feared through even to several Enerjaks, although this was because they mistook him for his much more powerful father. He is the brother Conquering Wind, but unlike his sister he was born through artificial means, while his sister was born naturally. He is also the successor to Lightning Lynx, their father. Unlike many other fighters, he had no interest in possessing even one Emerald to enhance his powers. On his journey, he was accompanied by a three-headed dragon named Lightning Storm, an overlander and Snively's son named Sleek, and later on his two sisters Conquering Wind and Air.

Thunder looks exactly like his father, but with a lack of scars around his body. People usually mistakes him for his father due to their similarities.

Like the rest of the Plasmians, he dresses in japanese style clothing. When he stayed with his homeland he wore traditional samurai lord armor featuring a distinct crimson sheen.

When he starts travelling he wears a dark jacket, white hakama and crimson armor with spikes jutting out and a large blue jewel in the middle of his chestplate.

His armor form is the same as his father's.

Thunder, born of a warlord bloodline, possesses the perfect power that many others desire. Because of this he is always composed and confident in his power.

His air of aloofness and indifference is a product of dignity that only one of such rare power may possess. Thunder is more or less emotionless, only anger, annoyance, and dissatisfaction showing on his face. Because both his heart and body are so strong, he had no desire whatsoever for the Chaos Emeralds. He had absolute confidence in his power, so he did not need the Chaos Emeralds and doesn't have to conspire with allies. Thunder even responded sarcastically towards Rutan, who had assumed an air of impudence due to his increased demon power. In battle he judged his enemy's power level and attacked with the minimum power necessary. He dealt with his enemies after determining their power. Once he had realized their weak point, their attacks were futile.

Thunder is obsessively proud of his father Lightning Lynx, of whom the Plasmian was in awe. Because he respects his bloodline so much, he despises his sisters as well as his mother Conquering Storm, mainly because she broke Lightning's heart. Thunder had stated that he seeks to only fight the strongest beings alive like Rutan and Pac.

Thunder felt nothing for others, sneering and dismissing humane feelings. Anyone in his way is an enemy whom he will exterminate without hesitation. He does not hold back his power, even against women. He rationalizes that all his prey is the same and defeats them accordingly. For one with such pride in his power, cooperation is proof of weakness and being alone is a condition for the strong. Once he judges someone as an obstacle, he is quick to kill without hesitation.

He used to feel nothing for anyone, but meeting various people, such as Pac, Rutan with his numerous proposals, and all-alone Air had brought change to his heart. After he saved Air and masters the Sword of Life, he started to show feelings behind his heartless and cruel words.

Thunder has a very inquiring mind when there is something he cares about, but at the same time, he had almost no tenacity of purpose. If he becomes interested in something else, he will arbitrarily turn his back on what he's doing, even during battle. Just like his fighting style, he is quick to make decisions and act on then immediately.

The encounter with Air awakened him as the true Plasmian Warlord. The smile and fleeting life of this young girl who tried to save him caused Thunder to change for the first time. The will of his father, who cared for the weak, has finally been passed to his oldest and only son. Thunder used to leave anything behind that might bind him but he has slowly but surely changed. Thunder genuinely cares about Air, Wind, and Sleek and while he rarely shows it, he does appreciate their loyalty.

Thunder originally held much contempt towards protecting the weak, seeing it as a waste of time and ridiculous. Unlike Rutan and Pac, Thunder has trouble admitting he had people to protect and out of pride, would never admit that he does.

Only one trait of Thunder is shown that he shares with his younger sister Wind. Both have tempers and are very easy to annoy (Wind being loud in his anger, Thunder being subtle) as he has been known to hit Sleek when he says something that displeases him.

As a full blooded Plasmian, Thunder is overwhelmingly powerful, being a match for any opponent he encounters. He has exhibited senses much more powerful than that of mobians and even many Enerjaks and a plethora of powerful techniques at his disposal.

Thunder displays complete immunity to diseases and toxins, that even poisons enhanced by Chaos Energy have no effect on him. His greatest resistance seems to be toward Chaos powers; he was able to enter Mt. Everest's destroyer barrier, by far the strongest of its type, without being killed, and has negated any mindcontolling effects.

Thunder is capable of independent flight in both his base and armor form.

Like all Plasmians, Thunder can move at a speed of lightning both on land and in the air. He also possess superhuman strength as he lifts up a mobile fortress with one arm and toss it aside. His strength he also equal to Pac's. Thunder also possess strong senses as we was able to detect Salma in her invisible form, something both Pac and Rutan failed to do, despite the two being strong sensors.

Thunder is a skilled swordman and marksman. His skills with the sword surpasses Pac and is labeled as one of the best swordman. He even deflects lasers with just his swords and have eyes closed. Thunder can use various types of weapons, mainly blade weapons. The most prefered are his twin swords like his father.

Like all Plasmians, Thunder is immortal and possess regeneration. He also possess the ability to transform into his beast form in his case as a giant electrical lynx. While this form grants him incredible brute strength, his large size, lack of agility and specialized abilities, combined with his lack of intelligence, makes his beast form more of a hindrance than an asset in battle, as noted by Sleek. Lightning states that Thunder have to be at the age of 35 of have proper control of this form.

Thunder use various types of japanese and chinese weaponry, from swords to polearms to bow and crossbow.

In his armor form.

The left arm is augmented with an armored gauntlet that allows Thunder to use the Souten at its full capability. The gauntlet is also capable of withstanding enemy strikes.

The protrusions on the shoulders and elbows can create a Lightnbing Barrier to compensate for the lack of a shield. These can also function as subthrusters, making its flight stance easier to control.

The power cable from the head can be plugged into the left shoulder, giving it power stored from the back condenser. This cable can also be directly connected to the Souten strengthening the strikes.

Retrieved from "https://sonicfanon.fandom.com/wiki/Thunder_Lynx?oldid=1474045"
Community content is available under CC-BY-SA unless otherwise noted.