Start a Wiki
This is an article about Thorn the Monkey, a character created by Jaredthefox92 on 10/16/2015. 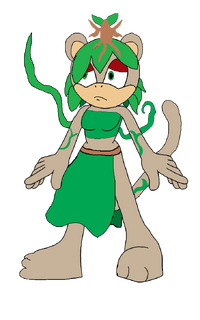 "I'm a natural at being a naturalist."

Thorn is an arbokinetic monkey created by Jaredthefox92. She is a radical extremist monkey who is believed to be affiliated with Terra, goddess of the Earth/Mobius thus granting her arbokinesis.She tries her best to preserve the earth, plant life, and all around ecosystem around her while shunning modern industrialization, as well as protesting for environmental protection.Unfortunately she is known for several acts of Eco-terrorism in protesting the rights of mother nature.

Thorn appears as a Mobian monkey with pale brown fur. She is seen wearing naturally made clothes made of plants such as a grass skirt, a grass top, and other clothing she can create with her mastery of plant life. She is known to walk barefoot and is believed to be able to interact and 'sense' the soil by doing so.Due to her relationship with plants she is known to literally spew vines and have sprouts of planets around her entire body, even so far as to have a small tree growing atop her head.

"You defy your 'mother' who has bestowed upon you so much!"

Thorn possesses a blunt, and direct demeanor.It is also known that she can be very condescending and often likes to point out the flaw of other's logic in a snide manner. She isn't afraid to speak her mind, as well as use her powers to 'protest' against those who would harm her precious ecosystem.It is known that she deeply cares for other life and the ecosystem, however sometimes she goes too far in her zeal to preserve the environment.

Much of Thorn's supernatural gifts revolve around her arbokinesis, and her natural 'green thumb.She can use her powers for a variety of purposes, from making natural food, shelter, and clothing for herself, to more combative purposes such as conjuring up weapons, beasts, and other types of dangerous things to get her point across.

While often seen as weak in powers, Thorn's powers can be clearly underestimated. While not so powerful in urban environments in the jungle, suburbs, or forest she can become a queen when it comes to combat. She isn't shy about unleashing the wrath of mother nature upon her foes.

Some more specific arbokinetic based abilities, combined with her own natural monkey like abilities include:

Thorn is quite agile and able to multi-task as a primate. She is known to be able to leap too and fro from building to building as well, climb up trees, and even hang upside down!

Thorn is not shy of entangling her opponents in either her naturally forming vines, or any plant like creature or construct she has around and literally constricting them, squeezing the life out of them until death.

Some of Thorn's weaknesses include, (but are not limited to):

This one is rather obvious, While Thorn is known to be capable of cooking with fire she is rather nervous around it than the usual person. Undoubtedly she is a poor match up for anyone wielding fire.

Despite Thorn's ability to leap large distances and climb she is not at her best when fighting in urban areas that lack vegetation or fertile soil.

Fungi are not plants by technical definition. Although she does have spores they're not fungus spores.

Retrieved from "https://sonicfanon.fandom.com/wiki/Thorn_the_Monkey?oldid=1780465"
Community content is available under CC-BY-SA unless otherwise noted.