Start a Wiki
This is an article about Thomas "Max" the Fox, a character created by Spyken (Emidikun on DeviantArt) on August 7, 2012. 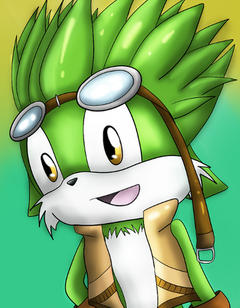 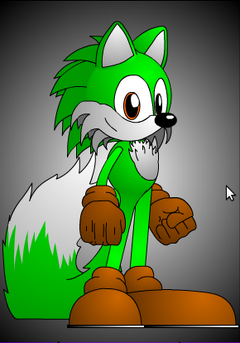 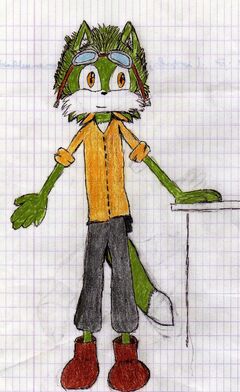 Max is a Fox from the future. His first appearance was alongside his teammates Spikes and Keith, trying to get rid of Sonic in the past.

Max is a green fox with golden brown eyes, long brown gloves and boots. His ears a a little smaller than the average fox. Many people have called him handsome.

Two years after trying to kill Sonic, he started wearing a light brown sleaveless vest, a brown short with a grey belt and brown aviator goggles. His hair is long and stands upwards, completely hiding his ears.

When he was 16 and went after Sonic, he lacked any other clothing. His hair was also shorter, making his ears visible.

Ten years later he got a bit taller and slicked back his hair, making his ears visible again. While on missions he wears a similar attire than before, only now wearing a white short sleeved shirt under his vest and dark grey pants instead of brown shorts. When relaxing he usually just wears a beige shirt.

He wears a grey suit with a black shirt and black shoes at the office, but without a tie, and with his shirt not completely closed. Since he can't wear his goggles at work, he usually has a pair of sunglasses in his hair.

Max is a very friendly and humble fox. He is ever smiling. He looks up to Spikes as a brother. He lacked confidence before, but was always quite capable around Spikes. He is very intelligent, having already finished all his studies, and at times he has even outsmarted Eggman Nega. For a long time, Max seemed to be perfectly satisfied with just being a "sidekick", but after Spikes disbanded the team, he found out he could be just as brave and independent as him and even became the leader of a team himself. He is very caring and thoughtful of his teammates. Furthermore, his confidence has grown as a result of his various accomplishments as a Peace Enforcer, enabling him to handle himself well in combat situations. Most of the time, he will keep his anger under control when pressured, but this can build up into a rage if he snaps. When Spikes returned, Max returned to his former self and wanted to give the leader position to Spikes, who refused, saying that he did a good job. Since then, he doesn't doubt of himself anymore.

Max was born the only child to Richard and Margaret Pirlingham. This made him the only heir of the family's engineering business. This was also the cause he grew up alone, since he was hometaught. At the age of ten, he had finished all his studies, leaving him very bored. One year later, he was abducted. The reason for his abduction was to him being the perfect subject for the flight type of Project Sonic Reborn. An organisation detached from G.U.N. wanted to use them as super soldiers and take over the world.

The experiment went very well, until an unexpected failure of the core reactor which seemingly poisoned him and the two others. As the base was falling apart, their tubes broke and they came out of them, alive. He befriended his inmates and they proceeded to escape the base. When they got out, nothing of the base remained, leading Spikes to think that his family was dead. Enraged at the loss of his family and discovered that the "poisoning" had only enchanced their abilities, he proposed to make a team to seek revenge. Being bored in life, Max happily agreed, to have the freedom he never had. They called it Team Atom. They would spend 5 years hunting down every member of the organisation and after finally finding and defeating the leader, he revealed them that Spikes' family was still alive.

Following this, they were confronted by an unknown scientist (who was Eggman Nega in disguise) that persuaded them that killing Sonic in the past was the only thing they could do to regain his their lost life and family. Using a machine of the same scientist, they travelled to the past and went to search Sonic. They first found Amy and befriended her, especially Spikes, since she remembered his his lost sister. After finding Sonic, Spikes ordered Max and Keith to distract Tails and Knuckles. Max' fight didn't last long, since Tails was not really a fighter. He used a stun gun on Tails and he was defeated. Meanwhile, Spikes had engaged a fierce fight with Sonic. Sonic was not prepared for the Atomic powers of his foe and transformed into Super Sonic, being more than a match for Spikes. Before that Spikes could lose however, he and Max shared their powers with Spikes. As Atomic Spikes and Super Sonic continued the fight, Amy intervened before Spikes could lend a final blow.

She told them that Eggman had made another giant machine which suceeded in defeating the Chaotix and...Shadow. Sonic was not really concerned until he heard that Shadow had also been defeated. Spikes realised that this was more important than killing Sonic at the moment, so he and his team agreed to help. After a long battle, Max realised that the robot had futuristic parts. At the same moment, Eggman Nega revealed himself (still in disguise) and announced that he was the mastermind behind those events. Enraged to have been used, Spikes lanuched a Atomic Tornado at the scientist, only to have the machine power up into a large robot. Sonic then offered him the power of the Chaos Emeralds and they both went Super. The two of them bested the robot and destroyed it. The cockpit however, was empty. At the end Team Sonic shook hands with Team Atom and they returned to the future. Spikes disbanded the team.

Two years passed and during this time Eggman Nega revealed himself. Feeling the world needed an organisation of heroes, Max founded the Peace Enforcers . Every plan of Nega was stopped by them. On a attack in a big city, Spikes reappeared and saved the day. After robot-cleaning the town, Spikes was attacked in his back, only to be "saved" by Keith. Spikes commented that he was slow, with Keith replying that he doesn't have superspeed. This was the rebirth of Team Atom .

Max wanted to give the leading position of the Peace Enforcers to Spikes, but he refused, saying that he had done a good job without him these two years and that it didn't have to change.

Genius intellect: Max is a capable inventor and skilled mechanic. He has a rivalry with Eggman Nega in that regard. This has led to the creation of various pieces of gadgetry, such as his twin blasters. He's also capable of piloting aircraft and other vehicles (though he prefers flying on his own).

Skilled marksman: Max has proven to be quite skilled with artillery, from pistols to cannons. It's is unknown where he learned it, but it's rumored he trained it secretly in his childhood.

Basic combat: Due to him coming from a rich family, his parents wanted him to be safe if he was ever alone. Therefore, he was given self protection lessons, deriving from judo.

Leadership: Due to his upbringing, Max has excellent leadership skills, in contrast with his personality.

Flight: Being the fly type of the project, the main aim was to let him fly. So after the experiment, he could spin his tail twice as fast as Tails, making him able to fly. However, he almost never uses this, as he calls it a slow, ugly hovering.

Atomic flight: Due to the instability of the experiment, he was gifted the power he calls "Atomic flight". Unlike his teammates, his entire body gets covered in a green "plasma" aura.

"Atomic" Max: It's not really a transformation, more the releasing of all his power. Max is known to have the strongest Atomic powers, a fact he discovered recently. The drawback is that he loses consciousness after every time he does it.

"Super" Max: He doesn't have a transformation of his own, but when Spikes goes super, he can share the power with his teammates. This causes his fur to lighten, gaining the same ruby red eyes and having the same golden aura.

Limited powers: His great powers are also a great weakness. When he was younger, he never used his full potential, due to his age. But because he is an adult now, they are on the maximum. This brings the problem that too long use will make him not only make him lose consciousness, but also the use of his body and even his life. To compensate he negated his blasts, the power of his barrier and reduced his flying speed. This made that he can use Atomic flght indefinately.

Limited combat skills: While he is a very good fighter, stripped of his powers and weapons Max would lose immediatly against a well trained foe.

Max' belt: When they returned from the past, Keith was the only one without physical problems. Max examined his gloves and saw that they were energy-containing. He used the data to create his belt and Spikes' shoes. It was made to be able to contain the Atomic power emaning from him. His belt is special in that it can negate powers selectively.

Twin blasters: To make up for his Atomic blasts, he carries two blasters that emit the same energy as them. However, they are weaker than his own blasts.

1 of 7
Add photo
Retrieved from "https://sonicfanon.fandom.com/wiki/Thomas_%22Max%22_the_Fox?oldid=1825155"
Community content is available under CC-BY-SA unless otherwise noted.