Not to be confused with Ryushu's character, Theia~

Theia the Lion, better known by her full name as Theia Cillana, is the adopted mother of Sunny Cillana.

Theia is a white lion, therefore having pale fur as opposed to others of her species. Her hair is shiny and silver, though appears more blonde in the sunlight. She is often called 'pretty' or 'beautiful' by others, however she receives no romantic interest from anyone.
Despite her older age, she looks quite young, in which people are astonished whenever she tells them about her age.

Theia is quite curvy and lightweight. She's nervous about this, however, so she wears larger clothing (she will occasionally wear something form-fitting, though).

Theia often wears clothing with shiny objects or jewels on them. She likes these clothes to be baggy, and not fit her shape (due to being shy about her curvyness). Her clothes also heavily involve the colors purple and majorelle blue.

Mentioned above, Theia's fur is lighter and paler than other members of lion family. She is a white lion, after all~

Theia's ears are more like a common cat's, than lion.

Theia's voice is overall soothing, though when it gets louder, it becomes quite whiny.

She also has no known accent.

Theia is overall a calm, generous, and understanding feline. She will try her best to remain polite, even to the people she isnt sure of, and will even point out solutions to their problems.

However, she is very protective of Sunny (a reference to how protective lions are of their cubs). Due to this, she doesnt act as polite to characters that are friends of Sunny, such as Silver and J. She, however, eventually will warm up, depending on certain aspects.

Theia only has a few abilities. However, these abilities often come in handy during certain situations.

She is very flexible, which gives her good reflexes. Due to this, she can dodge objects that are thrown at her, as well as other things.
However, her most valuble ability is her Solarakinesis, which is quite advanced. She rarely has to use it, due to staying peaceful with others, but still practices to ensure she doesnt forget how to use it. Like Sunny's Solarakinesis, her powers work best to cheer others up, and other matters related to emotion. Though unlike Sunny's abilities, Theia's are also very good when it comes to fighting. Theia does what she can to train Sunny and make sure her powers end up the same, so that Sunny is able to defend herself.

Relations to Other Characters

You are welcome to add your character and write the relation, if they have met her.

Theia wasn't impressed for him, at first, but she was happy that Sunny told her about how J treated her, not just nice and generous, but like a brother, seeing as how J had helped Sunny got over her depression and that she is also returning the favor for him, in case he ends up suffering his emotional disorder. 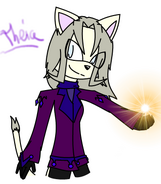 Just a small pic of her- I'll get a fullbody posted soon.
Add a photo to this gallery
Retrieved from "https://sonicfanon.fandom.com/wiki/Theia_Cillana?oldid=1840327"
Community content is available under CC-BY-SA unless otherwise noted.