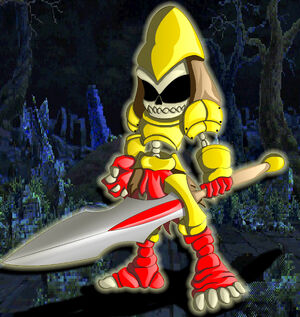 "GRAAAAAAAAARGH!"
Age
Unknown
Gender
N/A
Species
Unknown
Appearance
The Undead Hero is an undead skeleton of an unknown mobian species. Judging from his height, he was around adulthood, between the ages of 20 and 30.
Attire
The Undead Hero wears old armor that can be traced back to the ancient Acorn era. Composed of solid gold, the armor is durable more so than steel. He also wears red hand and footwraps, as well as a gold belt with red and brown cloth. His helmet has brown side drapes and a large, bulbous design.
Height
4'04
Weight
218 lbs
Relatives
Unknown
Alignment
Chaotic Neutral
Skills/Abilities
* Immortality
Ability type
Power
Forms
N/A

The Undead Hero, also known as the Undead Mobian, Undead Guardian, Undead Soldier, or Undead Paladin, is a reanimated warrior that once served the Acorn Empire during its time against the Overlanders. With documents of the war strained for reliable sources, it is unknown who or what the Undead Hero was; his race, species, even his gender has been speculated upon, though his deep voice as an undead has granted him a masculine title. The Hero, losing his sense of soul and identity is just a reanimated skeleton which only does what he did best during the war; fight and kill.

Not much is known of the Undead Hero's history, except that he once served as a knight to the Kingdom of Acorn during the war against the invading Overlanders. It was in this time that the Mobian was trained in the ways of Knighthood, learning its disciplines, its martial prowess, its tactical skill, but more importantly the lesson of humility in others.

During the end of the war, the Hero was struck down by multiple Overlanders during a final assault on their base. However, the plan needed a single soldier to draw attention long enough for the rest of the batallion to accomplish a backdoor assault on their leaders. The Undead Hero sacrificed himself selflessly for his people to win the war. His body was buried amongst the rest of the fallen with the Acorn Castle's courtyard, heralded as the hero of Mobius.

Centuries later, an unknown force, a power greater than life and death itself, has restored the Undead Hero to life. Taking up his sword, the Soul Sword, he only acts on instinct to which he knew best; to fight, and to slay those who would stand opposed to him. As one who does not feel, does not care, and does not live, he strides the world on a continuous path of death.

It is unknown what the Undead Hero was like during his time of the living, although it could be speculated somewhat accurately that his service within the Acorn Empire meant he was a caring, authorative but enduring individual. The fact that he was inducted into the Acorn Knighthood and the fact that not only did he partake in the front lines, but was also part of the final assault against the Overlanders, sould give the impression that he was skillfull, reliable, and completely trust-worthy of his allies. His act of sacrifice was also suggest that he was selfless, dutiful, and would do anything if it meant his people and his kingdom could benefit and prosper.

But as an Undead warrior, his self has been lost to the void, to which his only sense of action is of the violent kind; he remembers only to how to swing his sword effectively and without fail. Feeling nothing, and knowing nothing, the Undead Hero only lives to fight and to kill.

The Undead Hero is considerably powerful, mainly due to the fact that he has been animated through some form of supernatural, or even omnipotent, force of nature. In life he was but mortal Mobian, armed only with a sharp mind and a strong arm. In death, his powers could be considered that of unrivaled. The energy that flows through him can be used not only to augment his own body, but also released as powerful attacks.

His attacks are swift, strong, and relentless. His powers can be augmented to strengthen his own body and to augment his sword. Attacks would include the Raging Inferno; a swing of his sword that strikes the ground released a huge torrent of flame towards his opponents. his Whirlwind Massacre lets him whip up strong, shredding tornadoes to decimate his opponents. His most brutal attack, however, is Annaihilation; building up energy within his body, he explodes outwards in a huge explosion that destroys all in its wake.

His sword, named the Soul Sword, was said to be an acient artifact of the Acorn Empire that is said that, with the death of its wielder, his soul, or at least a portion of it, would be kept within its blade. Some suggest it was this that brought the Undead Hero to life, although it does leave several questions.

The lack of a mortal body also leaves the Undead Hero to be more durable to pain, quicker and stronger than a mortal Mobian. His body is not restricted by movement from muscle or mind, allowing him feats of absolute proportions. His lack of senses means he cannot be tricked or decieved, and his lack of feeling means he cannot flinch from harm nor pain.

The most intimidating power of all is the fact that he cannot die. Already dead, it is impossible for the Undead Hero to feel pain, hurt, or harm. Unable to be killed, the force that drives him to live cannot be extinguished by simply attacking relentlessly.

Retrieved from "https://sonicfanon.fandom.com/wiki/The_Undead_Hero?oldid=1295275"
Community content is available under CC-BY-SA unless otherwise noted.