Start a Wiki
The Quest Empire (also known as The Quest.) is an alien rebel front led by Storm the Dark. Their main purpose is a purpose no other villain achieve:RULING THE WORLD.

Commander of the Army 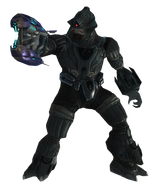 Storm Android
Add a photo to this gallery 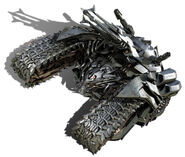 Mega Station's Defense Fleet
Add a photo to this gallery 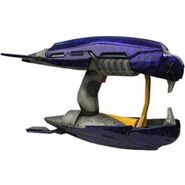 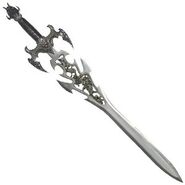 Flamethrower
Add a photo to this gallery

Mothership out of disguise

Aquatic Kingdom
Add a photo to this gallery

The Quest is quite a strong army. With it's technology and it's well-trained officers, it can push far but as always, never achieve their goal. Their officers always come up with good strategies that'll defeat or push back enemy forces. They also come up with those that'll distract or push back Sonic, Prowler, and co. but most of them never work. But their most hatred person is Prowler the Hedgehog. Ever since The Quest and Team Prowler first battle, they are worst enemies.

The most common soldiers. They are low ranking officers who often done rough labor.

The well skilled, intelligent, troops. They have higher ranks than the main soldiers and some of them reach commanding ranks.

Quest's main, mechanical troops. Since they don't have built in weapons, they have to carry them.

Small bug-like robots. They are armed with a light plasma cannon.

Flying robots. They are armed with a laser and can repair machines.

They are The Quest's scientists. Like human researchers (archaeologists, biologists, geologists, etc) they study about anything that is considered interesting. They are often seen in labs, ships, factories, and with reconnaissance groups.

An infantry support vehicle that can hold one driver, one gunner, and two passengers. Armed with a plasma cannon.

A genie that grants death wishes that can hold one driver and one weapons operator. Armed with a heavy gauss cannon and two plasma cannons.

A tough fighter that can hold one driver and six crew. Armed with a heavy focus cannon and plasma cannons.

The main air vehicle that can hold one pilot and one co-pilot. Armed with plasma cannons, lock-on missiles, and carpet bombs.

A transport vehicle that can hold one pilot, one weapons operator, and sixteen passengers. Armed with a heavy plasma cannon.

An air support vehicle that can hold one pilot, one weapons operator, and eight passengers. Armed with a heavy plasma cannon and plasma torpedoes.

Quest's main warship that can hold a group of system operators led by a shipmaster and a thousand crew. Armed with heavy ship cannons, plasma torpedoes, and energy projectors.

An elite fighter that can hold one pilot and one co-pilot. Armed with plasma cannons and lock-on missiles.

A very powerful warship that can hold a group of system operators led by a shipmaster and a thousand crew. Armed with heavy ship cannons, plasma torpedoes, energy projectors, and massive amounts of bombs.

If Storm led a fleet, this is the ship in command. It is often used by Storm and Excolous. It can hold a group of system operators led by Storm himself and a thousand crew. Armed with heavy ship cannons, plasma torpedoes, and energy projectors.

Customized spaceships that are deployed to prevent any intruders from entering the base. The fleet contains spaceships, gunboats, and fighter jets.

This weapon is one of the greatest because of it's damage, rate of fire, and accuracy.

You better watch out! The flame will stretch far but not sniper rifle far.

A long range weapon that it's darts can be absorbed as soon as it makes contact with beings and knock them out.

A long range weapon that fires a piercing beam.

A weapon that can fire an explosive orb.

A long range weapon that fires a laser beam.

A deployable weapon that can rotate 180.

Like most grenades but when it explodes, it releases a burning acid, and a gas that'll knock someone out.

The Quest's first base that is located in an island in the isolated areas of the ocean. It serves as a fort, training facility, a dock, a foundry, a prison, and further from the main structure, a mining facility. It is defended with watch towers, turrets, and a gunboat blockade.

A 20 mile wide and 3,500 foot tall ship. It houses smaller fortresses, training facilities, foundries, prisons, storage rooms, a room for the primary weapon, and docks for smaller ships. It's defenses are heavy turrets, plasma torpedoes, energy projectors, a destructive weapon similar to the Eclispe Cannon, and a disguise as a 25 mile wide storm cloud that can disable anti-Quest aircraft.

It's basically a large, isolated, canyon with a Quest outpost in the center of it. It serves as a training facility, a fort, and a mining facility. It's defenses are similar to the island base but without a blockade, mainly because of the size of the canyon and it's hazardous conditions.

Slightly smaller than the Mothership, the Mega Station is The Quest's space station that somehow secretly reached and joined orbit. It's defenses are heavy turrets, plasma cannons, a Magnetic Accelerator Cannon, energy projectors, and EMP weaponry. It houses a main observation deck, labs, docks, and a long main hall. It is currently cloaked and won't be revealed until...

Obviously because there is no room above ground, Storm later built a city 15 miles below the surface. It is divided into 3 districts.

Basically observation decks, labs, docks, and rooms. The Main District is the entrance of the metropolis.

An area that constructs Quest vehicles and machines. It is cloudy because of the smog and cold.

The city itself. It consists of many skyscrapers, most of them not really that tall except the main building.

A city-like base that is underwater. It's main purpose is heavy support if any Quest troops demands any supplies. It has quite the amount of supplies The Quest needs and is a stronghold.

Retrieved from "https://sonicfanon.fandom.com/wiki/The_Quest_Empire?oldid=731109"
Community content is available under CC-BY-SA unless otherwise noted.