Start a Wiki
This is an article about The Overground, a location created by Razzoom. 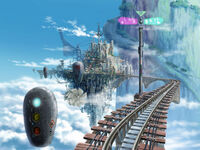 "Where having your head in the clouds is normal!"
Basic Information
Name
The Overground
Other Names
The Democratic Republic of The Overground (former)

The democratic free state of The Overground (current)

It is currently very clean and slightly darker than usual at night. Being a Colony of The Underground, it is used to house the Homeless, Rebels and people who lived in the towns that got destroyed in the effort to build Station Square. The currency is money (UnderDollars) and this is also the preferred trade method.

Many Mobians whose homes were destroyed in the effort to build Station Square live here, but also people that live in The Underground normally. The language is a very complicated one. There are two political parties, the Central Party for the Underground (CPU) and the General Party for the Underground (GPU), along with the Technical Interprovince Victory Organisation (TIVO), which is a political party from the Overground. There is no real religion, although 1% of the entire population practices Voodoo.

In the year 1919, Station Square was going to be built. Many towns were crushed and therefore several inhabitants fled underground into the Protection Bunkers, and recreated many cities there. The Underground was established in 1889 as the huge Protection Bunkers were united as a separate nation, they were never used for their intended purpose and therefore forgotten by the Mobian government. Since 1920, many inhabitants changed the look of The Underground to a much more appealing place, including the installation of natural sunlight redistribution systems.. Their language, Chiz, was created in that same year in order to build a bridge between the many cultures. In 1984, The Underground went to war, and they conquered The Overground, ending the reign of the Dictator Erlesnoa. The Overground's resistance had previously been helped by The Underground, and Chiz was seen as the language of freedom.

Retrieved from "https://sonicfanon.fandom.com/wiki/The_Overground?oldid=1852984"
Community content is available under CC-BY-SA unless otherwise noted.