Start a Wiki
This is an article about The Lynx Triplets, characters created by Spyken (Emidikun on DeviantArt) on January 8, 2013.
L3 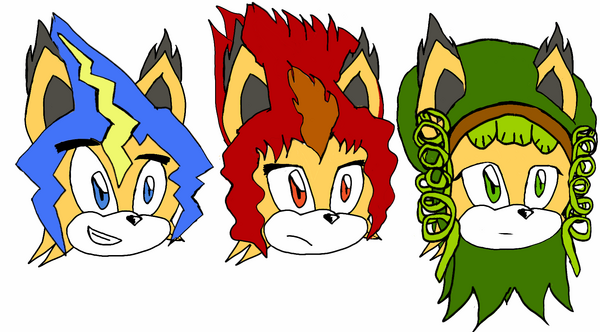 The Lynx triplets, better known as L3, are a superhero team consisting of the siblings Eleim, Fijo and Nathris the Lynxes. These lived a somewhat normal life with their older sister Kyxen until a meteorite gave them powers.

Eleim is the oldest of the three and likes to remind it to the others often. He takes pride in his "right" to boss the other two around. While he likes to be in control of everything, he can also be found goofing off with his siblings. He is the one taking heroics the most seriously, wanting to live up up to his idol, Surge the Hedgehog.

Fijo is the second eldest of the bunch. In line with his element, Fijo is a very temperamental person. He rarely stays fixed on one thing for a long period of time, so he is usually found doing several things at the same time. He really likes his powers, which is also the major reason why he became a hero in the first place, so that he can use them freely.

Nathris is the youngest and only girl of the three and always seems bored with life. Nearly every situation she is in will not impress her. Under this mask however is a very caring individual, who is very attached to her family. She forced herself not to care because she had difficulties expressing herself after seemingly not fitting in with other girls her age. While she is very tomboyish and doesn't mind hanging with boys, she dislikes being called "one of the boys". With that in mind, she denies liking to hang out with her brothers most of the time, which is ironic because her reason for becoming a hero was to be able to stay wit her brothers. Despite her insecureties, she doesn't like being treated as a damsel in distress and gets irritated by her brothers' overprotectiveness towards her.

The triplets were born in a loving family with an older sister named Kyxen. While their sister was a bit dissapointed with not being the center of attention in the house anymore, she still doted on them. One day disaster struck and their parents died in a car accident. The triplets took this less hard than Kyxen because of their age. The siblings were able to continue living in their house due to an unknown family member sending them money, but Kyxen still had to take a more motherly approach towards them, which caused a permanent shift in their interactions.

Someday while the siblings were out in the park a meteor impacted near them. While Kyxen went out to get help, she told the triplet to stay where they were. Fijo was too curious however and went off to see as soon as she left. Wanting to keep him out of trouble, Eleim went after him followed by Nathris (who didn't want to stay alone). Arriving at the crater, the siblings were startled with the still intact, glowing meteorite. Still curious, Fijo went closer to it. His two siblings tried to stop him, but instead the three of them tripped and fell headfirst against the meteorite. When Kyxen came back with help, she was unnerved to not find the triplet where she had left them. When they heard an explosion a bit further ahead, she panicked and ran as fast as she could to that location. She was horrified when she saw her siblings lying unconscious inside an seemingly empty crater. The three of them were immediately hospitalized.

When the three of them woke up, they were greeted with immense joy by their sister, who had spent all the time by their bedsides. After that she tearingly scolded them for not listening to her and scaring her that way. When everything had calmed down, she quietly asked them if they felt any different than before. The triplet didn't understand the question, but Kyxen told them it didn't matter. Not long afterwards, the doctor came in and expressed his relief in their recovery. What they thought had been a single night was actually two days of sleep. After saying this, the doctor also asked them if they felt any different. Noticing two people already asked the same question, Eleim asked them what the problem was. The doctor told them to look in the mirror. When they did, they were shocked to find that their eyes and hair had changed in color and shape. Their brown hair and eyes had turned into blue eyes and blue/yellow hair for Eleim, red eyes and red/orange hair for Fijo and green eyes and light green/dark green for Nathris. Shortly afterwards, they discovered that they had elemental powers. Eleim could control lightning, Fijo had control over fire and Nathris gained control over plants/nature. All three of them also gained the power of flight, but only when together. The three of them quickly became their town's superheroes under the name L3, protecting it against crimes and supervillains.

1 of 2
Add photo
Retrieved from "https://sonicfanon.fandom.com/wiki/The_Lynx_Triplets?oldid=1828753"
Community content is available under CC-BY-SA unless otherwise noted.