In this part we revisit what Balta and Patrik are up to. This part is where things start to heat up, and the plot gets rolling. Expect a inside joke or a jab at the Sonic fandom in this one. Well, enjoy! 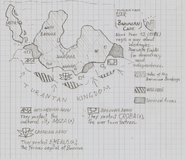 Part 1: The Defense of Turanta Part 1: A Dull Day

Part 4:  The Defense of Turanta Part 4: A Galatic Greeting

Balta landed her 310 Raven gunship on the roof of the local AMA station in Myza. She got out with Patrik and both of them headed inside. As they walked in they were saluted by AMA personnel in the station, in return both Balta and Patrik saluted back.

After this formality Patrik and Balta left the station and proceeded to the bar Patrik spoke about. The snowstorm appeared to have receded a bit and despite the uproar on the other side of the city many people seemed to go about their business.

As Balta strode down the semi-frozen walkway she could not help but notice the beauty and majesty of the Turantan architecture. Myza was known as the cultural nerve center of Turanta for a very good reason. As she walked she gazed upon the large, well sculpted, and very well masoned buildings. They were very awe inspiring and shown examples of magnificent craftsmanship. They were much more appealing to her then the grey and overly fortified city walls and buildings she would find in Anti Mobian Federation capital city of Siag on Moebius.

“These people seem much livelier than your average Moebian.” Batla thought as she saw people in an enjoyable bliss of the winter wonderland that befell their city.

“In fact they remind me of my village in Roseania.” Balta thought as she followed Patrik and recalled her childhood of playing in the snow with her friends on the anti-world.

“You alright Balta?” Patrik said as he turned around to her.

“I am, I am just enjoying the scenery. Things are much livelier here then what I am usually accustomed to.” Balta replied.

“Yes, the bartender. Just follow me to the bar and you will meet him.” Patrik said as he motioned for them to continue.

Balta did as Patrik said and accompanied him to the bar he told her about. Instead of waiting for Patrik to open the door for her, Balta proceeded to open it and walked right in. Patrik knew that while Moebians did indeed have a concept of courtesy and manners, many Moebians tended to be blunt and straight forward. Balta was no exception to this rule as she would gladly barge herself into a building without a second thought.

“Heh, you are some piece of work Baldrova.” Patrik thought to himself as he followed behind her into the bar.

Meanwhile back at the AMA command center in the mountains Corporal Brent Koala was at the radar and communication station. Balta left him to contact her if anything went wrong while she was absent, yet Brent as well as the other soldiers thought it would be a good time to relax seeing as things were going slowly on their end. Truth be told monitoring duty was not the most glamorous or invigorating assignment to a Moebian, even less so to a member of the Psychic Guardians. The corporal and the rest of the soldiers stationed at the command center took it easy and relished in the fact their commander was absent for the time being.

One of the soldiers took a quick glance on the radar however, he saw what appeared to be a large blip on the screen.

“That’s odd” the soldier said to himself.

“What is it?” Asked another AMA soldier.

“I am seeing a large blip on the atmospheric map.” Replied the observer. “Perhaps it is just one of our supply ships entering orbit?” Asked the second soldier.

“I do not think so, we were recently resupplied last week, and we are not scheduled for another for quite some time.” Replied the observer.

“Well then perhaps they are Turantan or Cavarian? Cavarians have big ships you know.” Said the second soldier.

“Um guys, I think you need to see this.” Another soldier who was gazing outside the window said.

The Mobians looked outside to see the sky changing color. It altered from what would be a normal snowy and cloudy atmosphere to a strange red and purple hue. It appears another odd anomaly was happening as well, the clouds where opening up leaving gaps in between them.

“What the h** iis going on?” Asked the corporal observing the odd spectacle.

Just then several more large blips and a dozen smaller blips appeared on the radar screen. The corporal looked at the radar in shock and confusion. His bones started to quiver as he never seen a situation like this before.

“Sir, I think they are ships entering orbit! Also I am picking up what appear to be fighter craft!”

“We have to contact the Colonel! Send out an alert! Priority red!” The corporal barked to his subordinates.

A few minutes after that the soldiers in the bunker frantically tried to send out an alert or get in contact with the people below the mountain. Yet the strange sight in the sky was somehow disrupting their communications. Severing the AMA soldiers in the command bunker from their comrades below.

“It’s no good sir, we’re being jammed! I cannot make contact with the colonel, the Turantans, or anybody!” Replied the radio operation and the communications team.

“Why me? Why now of all the rotten time?” The corporal thought to himself.

Meanwhile Patrik and Balta have just left the bar, apparently Balta didn’t take her first drink of Cavarian Cinnamon too well and she had become addicted. Patrik had never seen someone get drunk on their first few shots of Cavarain alcohol before, much less on their first try. Balta started to wave her pistol around in the bar and Patrik decided it was best to vacate the premises before she caused an incident in her drunken stupor.

“Now I see why Moebians in the AMA do not drink that much.” Patrik said while dragging the intoxicated colonel outside of the establishment.

“Mmmmm…That was some good stuff.” Balta spoke telepathically, yet in a garbled up mess and very faintly into Patrik’s mind as she was not able to concentrate.

Patrik had never seen Balta in this light before, normally she is uptight, reserved, and rarely showed signs of emotion. Now he couldn’t help but chuckle to the goofy looking face she was making. If she could talk she would be saying all sorts of wild and crazy things right about now.

“You know, you hedgehogs are all alike, what with your spines and all…You guys must breed like crazy, and everywhere I go on Mobius all I see is hedgies…” Balta muttered telepathically to Patrik.

“How are your powers even working right now?” Patrik said as he dragged her body to the AMA station.

“Because we we psychic guys are the worst of the best or something…” Balta replied before letting loose a hiccup.

“Whatever, just keep calm until we get to the station and get you sobered up? Also we will find someone else to fly us back to the command bunk-“

Just then Patrik caught sight of one of the strange ships in the sky, it appeared as a strange hexagonal cylinder. A design he had never seen before. Patrik hurried to get Balta in the AMA station. Inside everyone was frantically running about, grabbing and loading weapons. Trying to get communications with the command bunker, and gear up for what appeared to them as an invasion.

“Phew boy, I guess I shouldn’t have offered you a drink at a time like this.” Patrik said putting the drunken colonel in a chair.

“Colonel! Thank goodness you are here! Wait, um what is wrong with her?” Asked an AMA soldier to Patrik.

“Well I decided that she was cooped up in that bunker on the mountains, so we went to a pub and….” Patrik stopped there as he thought the soldier got the idea.

“What is going on here trooper?” Asked Patrik.

“I, I do not know. One minute we were enjoying chow and the next these crazy ships appeared in the sky everywhere!” The soldier said hysterically.

Patrik looked at Balta, he could almost shoot himself for putting him and every AMA member on Turanta in this situation without a commander. All he could do now is coordinate the men in the station by himself for the time being.

Retrieved from "https://sonicfanon.fandom.com/wiki/The_Defense_of_Turanta_Part3:_Dissarray?oldid=1799152"
Community content is available under CC-BY-SA unless otherwise noted.