The author of The Chaos Chronicles: Trident Trouble considers this page to be unfinished. As such, some sections may change.

Mobius is depending on us! If we don't return the trident, both land and sea will be doomed!

The Chaos Chronicles: Trident Trouble (ザ カオス クロニクルズ: トライデント トラブル Za Kaosu Kuronikuruzu: Toraidento Toraburu) is an action-adventure video game developed and pubished by Kaji Productions along with Dimps. It is the first game to be published on 8th gen consoles by Kaji Productions. It is also the first main series game that includes to official Sonic Team characters.

The Chaos Chronicles: Trident Trouble revolves around Nikki Kaji and her friends on the ultimate adventure to discover the secret of Mobius. It all seemed like a normal day for the female hedgehog, until she encounters a fish girl who seems to be in a panic. Despite not knowing each other, the fish asks for Nikki's help in protecting something, and reveals a trident from behind her back. As this happens, dark clouds appear in the sky, thunder booming as the winds increase. A tornado forms in front of them, a male dolphin appearing who is in regal clothing. He demands that the girls hands over the trident, but she refuses. As she says this, a terrible rain starts to fall as water is shot at them. Nikki attempts to block the attack, but her flames are extinguished as her and Aster are blown back, dropping the trident. When Aquarius gets a hold of it, he laughs evilly and disappears into a water twister.

The Chaos Chronicles: Trident Trouble has a huge hub world, allowing the player to explore and discover hidden items. In this hub world, you can interact with other characters and buy skills, items, and upgrades. Also talking to other characters can earn you free items. In the hub world, you are allowed to enter any stage that you've unlocked so far, also being allowed to change your current character to one you've unlocked so far in the story mode.

In the main levels of the game, the player controls the chosen character through a 3D environment defeating enemies, obtaining rings, finding hidden items, ect. Doing things like this give you exp points, as well as add to your final score at the end of the stage. Depending on how well you played the stage (Not taking damage, defeating enemies, collecting rings) will determine your final score. There is only one character in each stage, and only the character used in that stage will gain exp and potentially level up

Nikki is one of the main characters in the game. She's one of the default characters available at the beginning of the game, and is used in the tutorial stages. Her gamestyle is the most basic and easiest to use at first, having equal stats all around. In her story, she meets Aster and Aquarius in the city and is immediately given the responsibility to protect the trident. 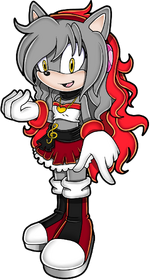 Aster is another important character in the game, her background tying together the entire story. She is a member of the Atlantians; a group of sea creatures who were chosen because of their special abilities to protect Poseidon's trident while he is in his incarnation form. When the trident is stolen by her arch-nemises, Aquarius, Aster requests help from her new friends to track down the trident and get it back where it belongs. Aster is meant to be used more as a special attacker, as her physical moves do not hit enemies hard. 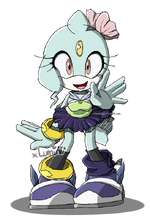 Retrieved from "https://sonicfanon.fandom.com/wiki/The_Chaos_Chronicles:_Trident_Trouble?oldid=1602834"
Community content is available under CC-BY-SA unless otherwise noted.