Voted Most Beautiful Female of Summer 2015! 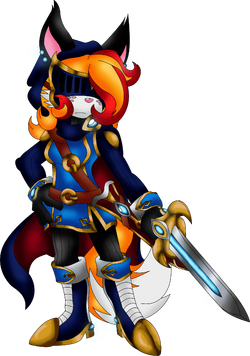 "Something tells me... that you should not be in MY forest at this time...For this, YOU WILL PAY!"

Katrina Ember Firefox is an anthropomorphic red fox that appears as a main re-occurring character in the Next Generation universe.

Katrina Firefox is a somewhat short, thinly built fox girl. Her fur is bright orange, with black ears, hands, and feet. Her muzzle as well as the tip of her tail are white in color. She has three pink freckles on each cheek. She has red dyed tips in her hair as well as a red marking on the bridge of her nose. Her eyelids are also bright red in color. Her inner ears and nose are bright pink in color,

Katrina's Attire is layered. Underneath her coat she wears a simple black bodysuit for protection against hits. It is made of a steel-fabric hybrid material designed to be resistant to sword hits. Over top she wears a royal blue, navy, and gold pullover coat. The torso of the coat is cut into sections at each leg. The stitching is lined with decorative gold embroidery. The sleeves are navy in color and are ribbed similar to most knit leggings or stockings. They are a stretchy, clingy material and cling closer to her arms than the looser fitting torso of the coat. The sleeves are cut at the end and can be refastened by two small golden buttons.

Katrina wears a simple double strapped brown leather belt that has circular buckles. The second strap wraps around her right shoulder and is used to support the weight of her sword and sheath. Her sheath is maroon in color and shares the same golden decorative patterns as on her coat.

Katrina's gloves are plain black with a single oval-cut cyan gem on top, fastened on by a golden set that wraps around the edges of the gem. The cuffs of her gloves are made of two-toned fabric and are adjustable via Velcro. The adjustable tab is the same royal blue color as her coat and shares the same embroidery patterns. The rest of the cuff is plain gray.

Katrina's leggings are fairly simplistic in design. They share the same vertical ribs as the sleeves on her coat but are black in color instead. They are also rather clingy to her body as well. Her socks are fairly similar to her gloves by sharing the same cuff pattern. The socks themselves are the same gray color. Katrina's boots are solid navy with a white tongue and black laces. The heel of the boots have a small wedge and have a decorative rounded cyan gem embedded on the heel. The soles of the boots are golden in color. The boot's toe is shielded by a rounded-triangular plate of brass for protection.

Lastly Katrina wears a navy, hooded cloak. The inside is a red velvet-like fabric that is highly insulating and warm. The cloak is fastened by s simple golden fibulae with another cyan gem as decoration. She also has two simple rounded cyan ear rings in each ear. She also sports a knight helmet-esque mask to further conceal her identity.

Born into a rather poor family where she was raised until the age of fifteen. Most of her childhood was a sad existence where her parents were barely making enough money to sustain not only her, but also her adopted brother, Ion. Eventually Katrina grew tired of this lifestyle and in an attempt to help her family she ran away.

She took up a lifestyle of thievery to end up helping her family earn enough money to get out of poverty. She fashioned her clothing by herself to conceal her identity, and eventually took on the persona of the blue rogue. She is swift on her feet and many merchants fear her for she may steal their spoils.

Eventually the dark tyrant, Mythrill the Terror saw potential in her abilities with stealth and summoned her as a recruit to his army. With such summoning, she accepted the job with a promise of pay so that she could eventually help the family she left behind years ago. This was her most daring attempt to help her family in need. Mythrill cast a curse on her which gave her strange powers. She was able to summon blue flames at her fingertips. At first she was unable to control the powers, but eventually she was finally able to master her skills.

Under Mythrill's instruction, she took up the art of sword fighting. She became skilled in the art and is known for her graceful style and way of movement. She eventually discovered Mythrill's true intentions of world domination and fled his complex back to her roguelike style of life. This was the turning point of her life. Even though at this point it had been only three years since she had left her home, she felt like something had to be done about Mythrill's intentions.

The rest of her timeline is unknown for she has vanished from intelligence’s site for months. Many of the Allies are unsure if she is dead or alive, but it is for sure that she has become a rogue vagabond who leaves no trace.

She is generally known to be a recluse, and she prefers to be alone. She doesn't normally talk much unless it is needed. She can be extremely emotional, and is most likely to show it only when alone. Her anger often gets in the way of battle, and is one of her weak points. She becomes reckless and careless when she is angered. When saddened or overburdened, she often times will result to isolation where she can best recover.

Otherwise her emotions come through seldom and she is often seen as a solid, strong persona with a powerful stance and calm voice. She is usually stoic and rarely let’s emotions flare up in times of business or importance. However on the flip side she is known to break down at times.

Adorned by the curse that Mythrill had bestowed upon her, Katrina has the ability to absorb thermal energy and ignite it at will to cast forms of fire as attacks or for utility. The cyan gems located on her clothing are used to store the energy away for long periods of time. Once the energy is used, it cannot be picked up again, thus Katrina must find new sources other than her own fires.

Katrina is extremely skilled in the art of sword fighting. She is known for powerful counters and for her gracefulness with her blade. She can land several powerful blows in very short amounts of time. If she is caught off guard or distracted her skill declines greatly and her focus can make her loose a duel.

Due to her light weight build and toned body, Katrina is incredibly fast on her feet. She is fairly flexible and strong allowing her to perform stealth tactics in battle and catch an enemy off guard. She is able to outrun most people and can easily get out of trouble this way. 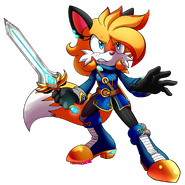 Old artwork featuring a maskless Katrina
Add a photo to this gallery
Retrieved from "https://sonicfanon.fandom.com/wiki/The_Blue_Rogue?oldid=1671969"
Community content is available under CC-BY-SA unless otherwise noted.