The reason for archival is: discontinued roleplay or whatever this is

This is the second Character Tournament. The fighters are three of Nero's, Vamp's, Random's and Hedge's characters. 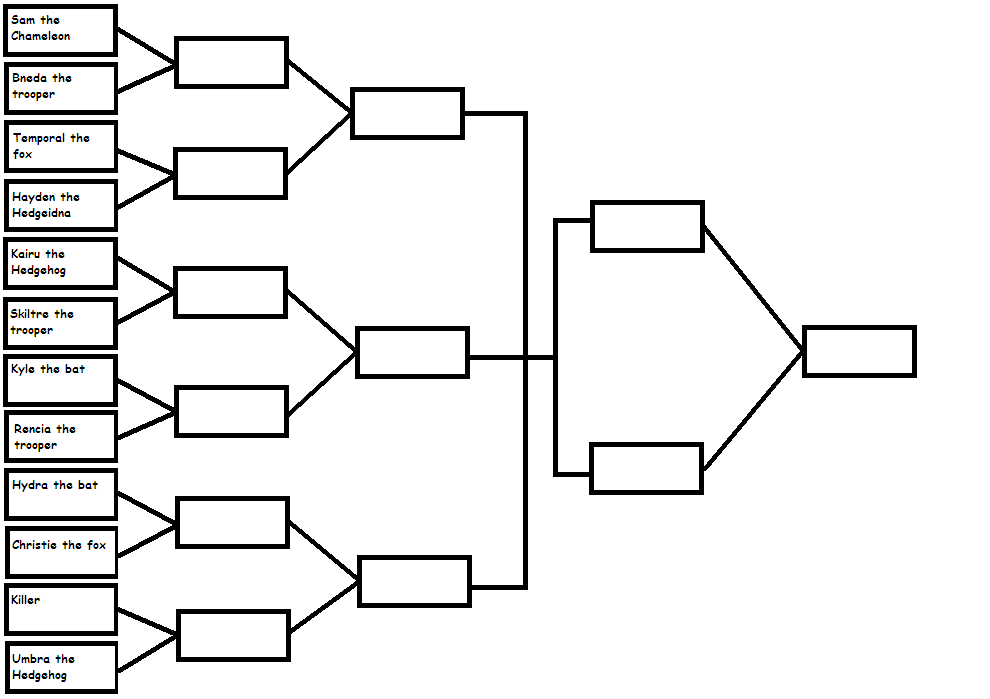 announcer: You may all wait in this room here, may i advise no fighting until your names are called, thank you

Sam: (Looks at the board) This'll be easy!

Hayden: Don't be so over-confident Sam, you know what happened last time.

Hydra: Christie the Fox, I have never heard of that name before.

Skiltre: *sits in the chair in the far corner of the room* I will wait here, talk to me if you want Rencia

Rencia: *leans against the wall next to the chair* All i have to say at the moments is that this lot is and interesting bunch

(Temporal, Christie, and Killer walk in)

Hayden: To Temporal: Hey, guess I'll be fighting you then.

Bneda: *walks in and scratches his head* Now where's that tournament map? ... even more the case, where are the other two?

Kyle: LET'S GET THIS SHOW ON THE ROAD ALREADY!!!!!

Bneda: (walks over) Hey Rencia, you know who Sam is?

Rencia: Nah, sorry, looks like you have to ask about ...

Bneda: *turns around* So who here is Sam?

Bneda: *thinks* Even more interesting *walks over to Sam and hold out hand* I'm Bned, your opponent for the first match, may the best being win

Announcer: Please may both contestants for the first fight go to the arena ...

Bneda: See ya there (teleports)

Sam: (Uses Supersonic speed and flies off to the Arena)

Skiltre: *silently gets up and checks the map* So who here is this: Kyle the Bat?

Sam: (Comes back after the first fight still healing himself with Hydrokinesis)

Kyle: (pops up in front of Skiltre suddenly) HI!

Skiltre: *doesn't flinch but sighs* Great ... another one of THOSE

Sam: He's still at the Arena healing his wounds. I gave him quite a blow. He'll be alright though.

Rencia: *slaps forehead* I told him to take that defencive upgrade from master Selmah, but he wouldn't take it! Damn fool!

Sam: He mentioned that he should've had an upgrade after he surrendered.

Hayden: (To Temporal) Looks like we'll have to fight each other soon.

Umbra: (teleports back into the waiting room) Hmph.

Kyle: When's it my turn? C'mon! (singing Diary of Jane by Breaking Benjamin under his breath)

Sam: You fight in the 4th battle, so that's 2 battles away.

Hayden: Not much, I can't believe I've just met somebody and now I have to fight them!

Sam: That's why they call it a Tournament, you don't know who your fighting until just before the fight.

Kyle: Then what do you call that? (points to board)

Sam: I meant before you arrive in the Waiting Room.

Kairu: 'Sup. (sits on a chair in the room and spins his railgun on a finger)

Hydra: This is stupid, I can't even defeat the person I have to fight right now.

Kairu: (bored, shooting out the lights)

Sam: What are you doing?

Hydra: This is lame, can't I just fight someone already?

Announcer: Hayden and Temporal, can you please go to the arena.

Hayden: (To Temporal) Well, meet you there. (Flies off to the arena)

(The crowd waits in eager anticipation for the fight to start. Sam and Bneda have both got the standing ovation they deserve)

Bneda: I think you should, i still have ALOT i need to assess

Sam: If you insist. (Throws a massive 5 Powers attack straight at Bneda)

Bneda: *gets up, seeing his arm bent the wrong way, but he cracks it back into place* Graet! i wanted a challenge today! *Charges to sam, only blasting him in the chest at the last minute*

Sam: Impressive. (Makes a massive Tsuami wave and sends it at Bneda then freezes it just as it hits Bneda)

Bneda: *uses his electric powers to melt the snow, and his wind powers to dry him off* Keep that up and you'll ruin me! *Fires a thunderbolt at Sam*

Sam: (Gets hit by the thunderbolt and suffers shock) AAGGHH!! I am impressed, but simple lightning isn't enough to finish me off! (Flies high into the air, makes a massive Meteor storm, lights himself with fiery magma and charges into the earth straight at Bneda just behind the Meteor storm)

Bneda: *gets sent away from the meteor storm and then gets slammed by Sam, Gets up but his arm has completely come off only hanging by a circuit* I surreneder, i should've listened to my brother when he said to get an upgrade, but as usual i didn't listen.

Sam: (Gets up, takes his fire form off and starts healing himself with Hydrokinesis)

Bneda: *slowly the circuits heal his wound* Sorry i surrendered but, i know when i am out matched *holds out his good hand* No hard feelings?

Sam: None. (Shakes Bneda's hand) Is there any way I can heal you?

Bneda: *more circuits bring the arm back up* Nah, i'm fully robotic except for my head, so unless i sustained head injuries, you can't help *chuckles*

Bneda: *slowly makes his way to the waiting room* Times like this i wish master Selmah couldn't see us right now .....

Hayden: (Fire appears in the palm of his hand) I'll let you have the first move.

Hayden: (Tries it on and it fits) Wait, why are you giving me this?

Hayden: (Looks at the band) I'm not sure about this. (Thinks about taking the band off but decides not to)

Hayden: I thought we were meant to be fighting anyway.

Temporal:We Will be, but I can't hit a girl

Hayden: You gave me a girls bracelet didn't you!! (Literally burns the bracelet off his hands and shoots a big Icefire ball straight at Temporal's face)

Temporal:Whoa *dodges the FireIce Ball and takes out his sword* Heh

Hayden: (Flies into the air and makes a Firestorm, and all of these small fireballs come raining down on the arena)

Hayden: (Lands back down) Good move, I believe its your turn to make a move now.

Temporal:It is, *attacks Hayden with hand to hand combat*

Hayden: (Jumps back and thinks) I hope he dosen't continue this, I'm not good at Hand to hand combat)

Temporal:*Attempts to kick Hayden in the cut*

Hayden: (Dodges at the last second)

Rencia: *slaps forehead* just calm down, we are in the middle of a fight you know

Kyle: Meh, this'll be a cinch. Just correct me if I'm wrong, but you're part mechanical?

Rencia: yeah i am, but trust me *enters a battle ready stance* i'm not like any ordinary android

Kyle: That doesn't matter. As long as you've got one microchip in you, this battle's won. (snaps fingers, Rencia is unable to move)

Rencia: *is acting paralyzed and talking sarcastically* oh no, you stopped looks like i have to ... wait a second maybe i could *dashes towards kyle* punch you!

Rencia: *jumps back* androids have one brain like normal people, except we have wires and metal in our bodies *hand tranforms into a long barreled gun and takes aim at kyle* now do me a favour and surrender now

Kyle: Well, if you've got wires in you, then you're nothing more than my puppet! (gathers technokinetic energy in his palm, backflips over Rencia, and jabs him in the back, taking control of his robotic systems)

Kyle: No! You.. can't beat me... that easily! (massive feedback attack, kicks Rencia in the balls, combo sends him flying away)

Rencia: *recoils in the air* why kick me there? part robot remember *starts charging up a gust of wind in his hands*

Rencia: *the sky one disappears and the real one is behind kyle* hello *fires a compressed air stream at kyle*

Kyle: WOOF! (is hit, but recovers quickly and uses his wings to launch himself high into the air)

Rencia: eh *charges up a water fist and charges at kyle*

Kyle: (rencia passes through him, it's a hologram!) Two can play at that game!

Rencia: *only voice* then start playing *fires a water ball out of nowhere* boy!

Kyle: (vanishes, then a ring of clones appears around him) Holographic Hat Trick Combo Attack!

Rencia: *more water balls are shot out of nowhere, and he charges up a ball of wind* *thinks* where are you?

Umbra: Are you ready, my mettalic opponent? I will warn you right now, I have no intention of surrender.

Killer:*Fixes his voice box, then make's whirring sounds* Nether do I! *Get's in fighting pose*

Umbra: I shall allow you the first move.

Killer:Alright *punches the ground and jumps over Umbra*

Umbra: (levitates into the air to avoid the shockwave, grabs Killer's foot, and slams him to the ground)

Killer:*get's up and smacks Umbra in the face with his foot*

Umbra: (grabs his foot and crushes it with his hand) Pretty good.

Killer:Thanks, but this is better *creates a staff full of electric powers*

Umbra: Pity you won't get the chance to use it. Chaos Lance! (Chaos Lances Killer)

Killer:Ugh *falls to the ground then grins*

Umbra: What, pray tell, are you so happy about? (begins to charge Chaos Energy)

Killer:*Chaos Control's behind Umbra and hits his head with his arm*

Umbra: G-AAAAH! (spins in the air, then flips, charges towards Killer, and hurls him to the ground, then paralyzes him)

Umbra: I'm going to end this!! CHAOS ANNIHILATOR!!!! (forms a huge ball of Chaos Energy in his hands, then Chaos Controls straight in front of Killer and throws the ball, which explodes)

Killer:Thanks, for fighting trolls for almost a year helps

Retrieved from "https://sonicfanon.fandom.com/wiki/The_2nd_Character_Tournament?oldid=1680943"
Community content is available under CC-BY-SA unless otherwise noted.