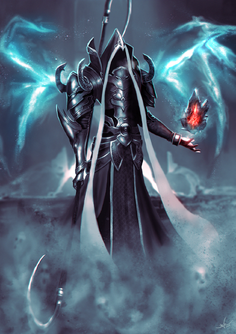 Thanatos was an Titan of death, and the second-in-command of the Infinity Organisation. He lead the frontier against the Acorn Kingdom during the First Infinity War, and was defeated by Samuel Hayden with the 2 of the Chaos Emeralds he had, and with the Infinity Armor.

Thanatos is shown to be arrogant, and cruel to those around him, including his in subordinates. He is also very prideful in his abilities during the First Infinity War, and is also quite a talker during it also. Ge us prone to anger if he is insulted by another, including his brother, Thanos, and even Aelos angers him.

During the early stages of the Multiverse creation however, he was a calm Elder Titan, and was shown to be able to process information calmly, and even been able to do diplomat easily.

As the Elder Titan of Death, he is shown to be in heavy robes, and possess skeletal wings on his back and with his faced shadowed over. He stands over 7 feet tall, and wears metallic gloves, and armor.

When he was created by Aelos, He and Thanos was protecting the Multiversr until Thanos started to rebel against Aelos. Due to this, Thanatos also started to rebel which then cause friction between the Elder Titans and Aelos to the point of the Titan War start, but was ultimately Aelos wont, and sealed both Thanos and Thanatos into the Purgatory.

However, after over 4500 years, Dr. Eggman was able to get in Purgatory and release Thanos and Thanatos, hoping that they would destroy Sonic the Hedgehog. However, Eggman's plan backfires when they attacked them, sending him back to Mobius, and made the two Elder Titans free once more.

However, Thanatos forces was all taken by Sonic the Hedgehog and his friends, and was forced to retread when the Nexus arrives, amassing a immensely large starship fleet. But Thanatos was actually secretly hacking into Hayden Enterprises database, and was able to located the Infinity Key in the reality of Earth-164896 and reality warped there with a large army of the Infinity Organisation.

Thanatos orders a attack on a small town on Mobius to which he was there also, causing great destruction. However, the attack was null has he was unable to find what he was looking, and retreated.

Thanatos was able to locate the Infinity Key in the hands of Samuel Hayden of this reality, and also found out he was adopted by the Acorn Royal Family. He then declare war on the kingdom, and soon, the two factions fought each other.

After 3 years, the war was won by the Acorn Kingdom with the efforts of Samuel Hayden, Blaze the Cat, Silver and Sally Acorn and with the defeat of Thanatos himself by the hands of Samuel.

Retrieved from "https://sonicfanon.fandom.com/wiki/Thanatos?oldid=1779774"
Community content is available under CC-BY-SA unless otherwise noted.