Start a Wiki
This is an article about Tessa Huntress The Hedgehog, a character created by Alphonse Uprising on 05/6/2016. 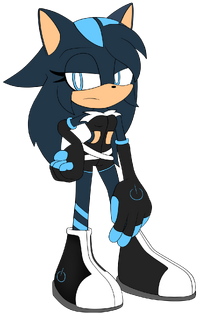 Theresa Hunt is a hedgehog created by Alphonse Uprising. She is a dark blue hedgehog who is the sister of Tesla Hunt. Theresa, like Tesla, is an electrokinetic, capable of manipulating and controlling electricity and lightning.

Tessa is a very standoffish, yet clever and sneaky character. It is shown that she is a treasure hunter-- but not the typical kind of treasure hunter. Working with Magnes, a great friend of her's, Tessa often hunts for scrap metal at her uncle's junkyard. She would usually sneak in at night and grab whatever she could find, only to help out Magnes with his workshop.

Even though she's an introvert, Tessa does show to have some sort of respect for the few friends that she has, including Magnes, though rather cold to her own family. The reason why was because she was legally separated from birth and taken under the care of her uncle, never able to see her birth family until over a decade later.

During the time of her birth, the country of Invid only allowed 2 children per family in order to control the increasingly high birth rates. Being the third-born child after Tesla and Marty, Tessa was removed and taken under the care of her maternal uncle, Simon Argall. Tessa grew up to be a rather silent and anti-social person, but later in her teenage years, she would become more extroverted and opened up to a few people.

During this time, she meets Maggy, and it took a few months to befriend him. After opening a car workshop, Maggy hires Tessa as an intern to help him gather supplies (which is scrap metal). Tessa would sneak into her uncle's junkyard at night, and steal as much scrap metal as she could find, and give Maggy all that she has.

Tessa and Tesla are practically the same when it comes to powers. Tessa harnesses electrokinesis; because of this, she can carry over thousands of volts and use them as powerful weapons. The stripes on her arms, legs, and head will glow brightly in reaction to this ability. Even her eyes, which always glows even if she's not using powers. Tessa would also be immune to other electrokinetics-- she could still take damage, but not as much compared to a non-electrokinetic. Absorbing electric particles at such a quick rate would cause her fur to glow bright blue; an example of this would be a direct lightning strike.

Tessa's electrokinesis is fueled by electrical signals and sources. This means whenever Tessa is near an electrical source, such as a generator or a thunderstorm, the severity and strength of her powers can vary based on how strong those signals are.

Tessa is a talented treasure hunter. She doesn't literally hunt for gold, though. She would usually sneak into her maternal uncle's junkyard at night when nobody's around, to take unwanted metal parts to help Magnes with his workshop. She's a great friend of Magnes and always wants to help him out with anything, which is why she does this.

Tessa is emotionally sensitive-- this is partly due to being seperated from her own family at birth, and being an introvert for most of her life. She would sometimes become very defensive and even break down when somebody dares to mention her early childhood. This becomes a great weakness for Tessa as she stresses out and can't control it.

Tessa Huntress
Add a photo to this gallery

Retrieved from "https://sonicfanon.fandom.com/wiki/Tessa_Huntress_The_Hedgehog?oldid=1800099"
Community content is available under CC-BY-SA unless otherwise noted.