Tesla Anima is a human scientist. She is the creator of Project: Pandora, and hired Erica Sakura to stop her. She is an expert (or so she claims) in the cartoon sciences, and is known for knowing many things about the cartoon mindset. 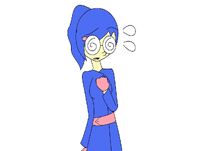 Tesla Anima is a brilliant young scientist. She is the (regretful) creator of Project: Pandora. She became a great friend of Erica's after she called Erica for her help.

She became a scientist after she played the Mega Man games, in which she fondly wanted to be like Dr. Light and his creations.

Tesla is known for coming up with some of the most revolutionary theories in cartoon history (see below).

Tesla is savvy and intelligent, but somewhat nervous. When she's really nervous, she can be forgetful. She can get a bit of a temper when she cannot focus.

Tesla has wavy blue hair, which is pulled into a ponytail. Her labcoat is blue with a pink belt. She wears a pink barrette and pink gloves. She has a somewhat large nose and wears glasses with swirls. She has freckles. Her shoes are pink tennis shoes with blue details.

Tesla is known for creating many theories about the cartoon universe that she plans on exploring. Her most significant are these:

Tesla is voiced by Mayumi Tanaka in Japanese and Candi Milo in English. Here are some things she's say.:

"I'm sorry to trouble you Erica!"

"Thank you so much, Erica and company!"

Retrieved from "https://sonicfanon.fandom.com/wiki/Tesla_Anima?oldid=1800613"
Community content is available under CC-BY-SA unless otherwise noted.