This Tyranitar, nicknamed Terry is a Rock and Dark Type Pokemon owned by Lerry the Bear in The Legend of Fox the Brave. As Lerry himself has said, previous ideas for nicknames were Tyran or Itar, but Terry disliked them both, having liked Lerry's name, so Lerry decided to call him Terry. He is Lerry's unofficial Starter, his first, strongest, and most trusted partner. Despite only receiving a mention in The Lost Fox, the creator of the series has given him a full-on description. 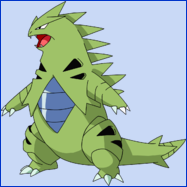 Normal: Terry somewhat resembles a dinosaur. He is mostly green with some black streak with large spikes running from his head down to his back with two more right above his eyes, giving him an intimidating look. He has three claws on each hand and each foot, a blue belly, about five spikes near the end of his tail, and eight black, triangular spots.

Mega: Some of Terry's spikes become longer, his belly becomes red, the black spots become larger and the upper two on his chest are large enough for a smaller red spot inside each. He gains two spikes on his knees(one on each), and the spikes on his tail become longer.

Terry is undyingly loyal to Lerry and, subsequently, Fox. Despite his huge build and intimidating looks, Terry is a gentle giant, but will not hesitate to fight if the need arises. Also, while he is unable to speak, he is plenty expressive, communicating his thoughts and emotions through various grunts and growls.

Before the Series: At some point during his life, Lerry met a lonely Larvitar while being unofficially mentored by Stubbs the Saber. Despite Stubbs' objections, Lerry adopted the lonely Rock Skin Pokemon, naming him Terry after he rejected the names Tyran and Itar and showed interest in Lerry's name. Terry then became Lerry's unofficial Starter and became incredibly loyal to him. He soon evolved into Pupitar then Tyranitar. At an unknown point in time, Lerry found a Tyranitarite for Terry, and received a Key Stone to Mega Evolve Terry. Terry was used to stop a troublemaking Pancham and weakened it(despite his 4x weakness to it) so that Lerry could catch him(becoming Goro).

The Lost Fox: Terry was mentioned to be participating in the battle on Angel Island when Austin finds Lerry directing him.

Terry is incredibly strong, which is no surprise, given his massive size. His current moveset consists of Stone Edge, Crunch, Protect, and Dragon Dance. A previous move he knew was Hyper Beam, but was forgotten in favor of Dragon Dance.

Terry's Ability in his Base form is Sand Stream,(Tyranitar's Hidden Ability is Unnerve, which makes the opposing Pokemon too nervous to eat Berries with the active Pokemon out), which kicks up a sandstorm upon entering(provided there isn't one already active). Terry retains his Ability when he Mega Evolves.

Being a Rock-Dark-Type, Terry is 4x weak to Fighting, weak against Water, Grass, Fairy, Ground, Bug, and Steel; he Resists Normal, Fire, Poison, Flying, Ghost, and Dark; He has a Type advantage against Fire, Ice, Psychic, Ghost, Flying, and Bug; And he is completely immune to Psychic. 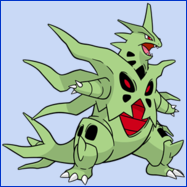 Terry is the first of Lerry's Pokemon to gain the ability to Mega Evolve; Lerry's Charizard Riza is the second.

While Terry cannot speak English, he can from Boulder the Lycanroc's POV

Retrieved from "https://sonicfanon.fandom.com/wiki/Terry_the_Tyranitar?oldid=1800611"
Community content is available under CC-BY-SA unless otherwise noted.