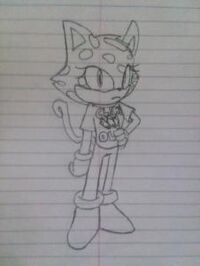 Terra is an ocelot standing at 3'2 and weighing 90 pounds. She has light yellow fur, along with brown spots all over her body. She also has a long, spotless yellow tail, along with retractable claws.

Terra wears a rather simplistic outfit, donning a green shirt that says "CLAWS OUT" with a picture of a claw on it in all caps and bolded letters and with grey pants, white gloves, and green shoes.

Terra is a very responsible person, which she kind of has to be, considering she's the oldest of nine siblings. Living this life has caused her to be able to deal with siblings well... however, the oder you are, the higher chance you will be pretty strict and admittedly rude to you, because she assumes you can handle it.

Terra is also very prideful, seeing herself as the carrier of her family's next generation's pride, along with never wanting to disappoint herself, her peers, or her family. She will always try hard not to falter, though this may evoke her doing reckless things for pretty dumb reasons.

Terra is quite difficult to befriend, due to her rather off-putting behavior. She rarely ever searches for companionship, and due to that, doesn't really filter what she says to you, and though she'll probably not say it, if she knows little about you and/or has had bad experiences with you, she honestly doesn't really care about your existence.

Terra doesn't like to leave mysteries unsolved. She is very curious, and will investigate things she finds suspicious, whether it be people, things, concepts, you name it. She will always get to the nitty-gritty to find out what needs to be uncovered, even if the end result is satisfying. So be careful not to show any strange behavior around Terra, or you're in for something!

Terra is a also a very hardworking individual, always setting goals for her future in order to improve herself. This means that sometimes, she tries to push the limits that she's sued that... that may be a good or bad thing, depending on the circumstances. Terra may also try to hard, which means that she could end up trying too hard, and disappointed due to failing to reach the high goals she put for herself.

Terra cares about the people she's close to very much, and tends to know a lot about them. Due to this, she is very protective, both because of her nature and because that's what having eight younger siblings can do to you. So, when she feels like someone she cares about that much is being threatened by someone or something, she will immediately jump to action, leaving no time to tell the offender to back off. This may appear as brash or rather foolish, but this brings up a very important thing in Terra's character - the fact that the people she loves can make her act very differently.

Terra Marvel the Ocelot was born to Aster Marvel and Flora Marvel in a relatively new and small family. Terra was just like your any other kid, living a very simple life. However, when she was three, her first younger sister was born, Sheena Marvel. At first, it was normal - though Terra was jealous that Sheena got all the attention, the phase passed, and they started to grow up like a normal family again. Then, Terra would learn something very important - her parents would never be satisfied. After Sheena, another son came. And a few years after that, another daughter. The cycle would repeat again and again until finally... Terra was a fourteen-year-old with eight siblings.

Terra has no natural abilities that she just got because she was lucky - no, she had to train hard for the things she has achieved. One of these things is her speed, which rivals Skid the Hedgehog and might even surpass him. She is able to create afterimages, seemingly teleport in yellow bursts, and even phase through solid objects if she reaches a fast enough vibration throughout her body. This means that she is very much a fighter who relies on pressure and taking opportunities to overwhelm and outspeed the opponent. However, to make up for this, Terra's strength is lacking, as she knows that if she's too focused on speed and strength, that doesn't leave too much room for defense, which is vital. Terra also specializes in upper body strength.

Terra is also skilled with her claws, something that she learned how to use efficiently at a very young age. Along with her speed, her claws can make for some very important blows that do more damage to the opponent, and they add a bit of range to her attacks, too. They can also psyche an opponent out, due to them being retractable. However, they are still a part of her body, which means that if you hit her claws, she will feel pain.

Terra uses her tail for grappling, whether it be in combat or just in everyday life. Due to it's long range, it has a number of uses - she could use to as an extra hand to carry things, she could use for threatening when cracking it in the air, she could squeeze an opponent with it, she could throw the opponent off with it, she could jab at the opponent repeatedly... it has a number of uses. However, it also comes with a very large weakness - if you yank on it, Terra becomes very sore, and she is not able to use it at all. It sends pain throughout her entire body.

She is also currently learning how to manipulate Aether, the flow of energy in the universe, by Aegis the Cheetah, a mythical legend who is also training Kibo the Wolf.

Another Terra pic by Skid, it looks cool!
Add a photo to this gallery

Retrieved from "https://sonicfanon.fandom.com/wiki/Terra_the_Ocelot/Sonic_Reborn_Version?oldid=1857452"
Community content is available under CC-BY-SA unless otherwise noted.