The reason given for cleanup is: recolours

"Don't poke me! It gets really annoying!" - Terra Nova The Echidna

Terra Nova the Echidna, or Terra, is a albino echidna and is the last of the Nova clan. This 16 year old Echidna is someone you wouldn't want to mess with. She'll tear you to shreds in an instant. 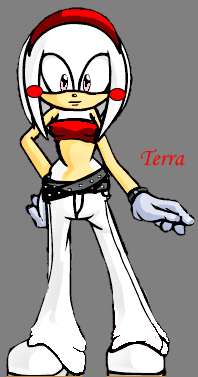 Terra's personality is normal. She is short tempered and easily angered. You'll normally find her onstage singing. She's an international star sharing her history through song.

When she was young, she was originally engaged to Knuckles the Echidna to unite the Nova and the Knuckles Clans. But when a disaster hit her clan, she was forced to flee. She eventually met Sonic and the others and has been with them ever since. She's helped Silver and Blaze defeat Iblis and with the power of the Nova Emeralds, helped bring Sonic back to life. Her adopted brother, Zach, met her on a journey and has annoyed her every since.

She can turn into a dragon on occasion. She mastered water, fire, earth, and air elements. She also has retractable steel claws, which will shred you on contact. She can also go faster than the speed of light.

Terra will weaken when her emeralds have been taken from her.

Terra has a special relationship with a lot of her friends.

Team Nova is made up of Terra, Canis, and Nova. With Nova's flight and Canis' speed, Terra is the power. They formed when Nova and Canis found Terra wounded by Hawk. They formed to stop any evil from destroying the future and Terra.

Vela Nova is Terra's daughter from the future. She helps her mom out in tricky situations.

Canis the Jackal is one of Terra's newfound friends. She helped her out in the Twilight Zone after meeting Shade.

"Who are you, and what do you want?" - To Amy when she sees Terra talking to Sonic

"I blame you for the destrution of my clan!" - To Knuckles when she sees him again

"You won't regret it!" - When chosen in Sonic Riders

"Catch you later slow pokes!" - When she passes someone

"I expected nothing less." - When winning a race

"This must be a mistake!" - When losing a race

"Take that slowpokes!" - When getting an S rank

"Humph. Better than losing I suppose..." - When getting an A rank

"This is really starting to get on my nerves..." - When getting a B rank

"This must be a miscalculation..." - When getting a C rank

"I can do better than this!" - When getting a D rank

"This must be a mistake!" - When getting an E rank

Retrieved from "https://sonicfanon.fandom.com/wiki/Terra_Nova_The_Echidna?oldid=1784800"
Community content is available under CC-BY-SA unless otherwise noted.