"The Deadly Six better prepare! Cause here comes the boom!"
—Tendo the Cat 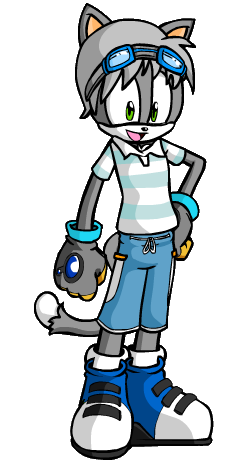 Tendo is a gray cat, with blue goggles. He also has a white and blue T-Shirt, black, yellow, and blue gloves, and blue tennis shoes. He wears blue shorts, and white socks.

Tendo loves to adventure, yet is gullible sometimes. He's intelligent, and can reprogram robots, but he has no expirence in actually building his own. He is kind, and brave.

Zero is Tendo's best friend. Everytime Zero attempts to build something, Zero test it out. Which explains his craziness. But Zero and Tendo always have eachother's backs in battle.

Tendo fought alongside Sonic in some cases. They sometimes talk, plan out an attack, or in most cases stand together in a epic quote.

Tendo and Tails both are geniuses. Tails easily being much smarter. They've worked on things together, and Tails has shown Tendo some things.

These two hardly ever interact. No known relationship is known between these two, except they battled the Deadly Six together.

These two interact even less then with him and Knuckles. They've talked to eachother very few times.

Tendo fought alongside Sticks several times. Tendo is good pals with Sticks, and prefers to fight with her more then Amy or Knuckles.

Eggman created Tendo, and the 9 other robots. But Tendo never knew that. Other then that, they don't know eachother.

Tendo was one of 10 deadly robots (That look like normal mobians) built and sent to Mobius, to attack. When there pods were sent, Tendo's crashed and messed up his circuits, and he woke up awhile afterwards.

Each of the 10 had diferent abilities. They didn't have names, but Tendo just went by the name Tendo. His ability was to be able to use his gloves to take the energy around him, and use it.

Tendo can use his gloves to absorb the energy around him, and use that area's energy to spawn weapons, or other things.

He is also intelligent, and kind of fast, and skilled in fighting.

Shock Spear made it's debut in  Here Comes the Boom, from when Tendo absorbs Eggman's electric field cage, which frees him and the others and gives him this spear.

Retrieved from "https://sonicfanon.fandom.com/wiki/Tendo_the_Cat?oldid=1556413"
Community content is available under CC-BY-SA unless otherwise noted.