Sonic Fanon Wiki
Register
Don't have an account?
Sign In
in: Pages to be archived, Mobians, Neutral,
and 20 more

View source
This page is scheduled to be archived.

Tectonic the Thylacine is the Mobian fursona of CelestialSun.

Tectonic appears as a black and grey thylacine. She portrays the physical features that a thylacine does, with cat-like ears, a long and thin tail, and tiger-stripes. Her stripes, which are black, run along her tail, back, arms, and neck. Her skin color is in two different colors: a light grey, and white. Her hair is a bronze with white highlights dyed into it. Her eyes are blue-grey (and sometimes appear to be blue-green, depending on the lighting). Strangely, the whites of her eyes are yellow, making her have a sickly appearance.

Tectonic is chubby and has a thicker build than most other characters. This makes her more sturdy and well-grounded. She is also quite curvy.

Tec clearly states that she likes clothing that is 'different' and inappropriate for the time or place. Such as, during winter, she'll wear T-shirt and shorts. In summer, she takes the opportunity to wear non-revealing clothing, along with odd accessories (scarves, ties, etc.)

Tectonic's fingers -instead of being round like most characters'- are pointy, and can actually be considered sharp.

Unlike real thylacines, Tectonic's ears are longer and wider. They are also pulled-back, making her seem angry.

The sclera of Tectonic's eyes are a sickly yellow color.

Her voice is mostly low, flat, and monotonous. However, she can force her voice to reach very high notes, and low notes as well. Her voice can also become very smooth, and yet very raspy and strained. She is also quite skilled at imitating others' voices, due to her very wide vocal-range (when it comes to singing, though, she just can't do it).

Tectonic talks with a slight German accent (though CelestialSun has no accent).

Tectonic talks in slurred-speech, often by mixing words together.

When Tectonic was younger, she was very destructive, but kind. She was quite depressed and usually had a sour mood due to being constantly tortured by kids in her school.

As she got a bit older, the bullying got worse, and more people started to dislike her because she was "absolutely crazy, and needed to calm down" and "needed to be more feminine".

Currently fourteen years old, her life is starting to brighten up. She now has taken a turn in maturity (now being quite vindictive and strict, taking after her father), yet still is a child at heart.

Her old enemies are now her good friends, and they greet her with kindness. She is a much more likable person.

In a brief summary, Tectonic is cautious yet brave, sly, generous, awkward/weird/...creepy, antisocial, yet at the same time a social-butterfly, and a whatever-happens-happens type of person. She pretty much contradicts herself (...she's a hypocrite).

At first sight, she will seem shy and cautious. Possibly even moody and vindictive, if you get on her nerves. First timers will not like her attitude and sensitiveness. To be friends with her, time must be taken, as she is definately not an open-book. No, her emotions and thoughts are hidden deep within herself, and even her closest friends have a hard time telling how she's feeling. Still, she is an enjoyable person to be around once you get to know her better.

Once known, it can be seen that she's, for lack of a better word, annoying. Yet she still retains some of her strictness from when she was first met. The number one thing to remember is that she's unpredictable. She could be either happy and 'stupid-sounding', sly and cracking jokes ("Trolling."), or rude and snarky. However you can always expect her to either laugh or willingly snap back whenever a seemingly rude comment is thrown at her.

When it comes to romance, she's absolutely useless. Not only will she not be able to give you any advice, she'll also say that she quite frankly is not fond of it. When it includes herself, that is. She also does not like the thought of intercourse .(Though, she can be quite perverted at times, but she doesnt count as too sexual.)

One of her most notable personality traits is that she's downright unusual. She can be random, or just plain weird. People often say she's awkward or scary.

Tectonic is a Geokinetic. With Geokinesis, she can manipulate minerals in the earth (such as rocks and medium-sized boulders). Her powers are quite weak. Tec also knows minor Martial Arts/Karate skills, and she is a Junior Blue Belt in Karate. She has quite a high intelligence, and she usually gets good grades in her schoolwork, though still may seem like a derp. Even though she may seem shy, she has quite the sharp tongue. Any insult that is thrown at her, she throws it back. Though, she may not seem as scary as others with the sharp tongue, usually because of her lack of ability to talk "smack".

She has a huge fear and weakness of fire. She is afraid of it because of a freak accident that happened in her past, leaving her with a burn on her neck (though the burn was small, she still doesnt want to deal with it again). Fire is a weakness of her and her powers. Tec also hates fire, because it destroys the environment. Tectonic is also disliked by many people, because they claim that she is "weird", and because of her random out-bursts, sometimes causing her to get 'depressed'. It can also be said that she is accident prone, due to her getting in many accidents, daily.

Something that is also counted as a weakness is how she is prone to getting instant insomnia and paranoia. This is due to her "scared" personality (though she still likes to experience frightening things). If Tectonic sees something....disturbing or truly frightening, it is hard for her to stop thinking about that certain thing, which enables her to sleep.

You may add yourself (fursona or not)!"

Please add your fursona/character here if you consider me as a rival.

Please add your fursona here if you consider me as an enemy.

Tectonic, despite being Ven's counterpart, tries to be nice to Ven. She hopes to gain her trust, and for them to become friends. The reason for this is: Tectonic barely gets to see her sister, so she thinks that maybe she and Ven could be "sisters". Though, all of these kind acts are wasted, as Vendetta completely ignores Tec.

Tectonic does her best to treat Vlad with respect (hoping that he could be seen as a "brother" figure), much like what she does with Vendetta. However, Tec's emotions towards Vlad depend on how she's actually feeling. For example, if she's in a mischievous mood, she'll try to bother him (or maybe even physically hurt him). Or if she's feeling sad or angry, she'll warn him to stay away.

On Vlad's side, he shows neutral emotion for Tec. He states that he doesn't really have an opinion, but he in fact does care about her.

Johnny, despite that he is by far 7 years older than her, views Tectonic as his adoptive little sister (only because it's true). This would likely for him to show his child-like manner towards her, but that's to make her happy. He gets along very well with her, and usually spends playing together or just hang around whenever they are bored. Johnny also likes to draw and, with the help of Tec (if possible), wishes that he'll become better at drawing someday.

Tectonic and Sunny get along very well. Tec notices that she has much in common with Sunny, such as their obsession towards the horror genre. Even so, Tectonic feels extremely sorry for Sunny, because of the depression problems that she [Sunny] is suffering from.

Jade and Tectonic have been friends for years, and share a sister-like bond. They often talk to each other via texting and internet, and usually only get to see each other during summer. The two can be extremely random and make a great annoyance team!

Ferra is Tectonic's pet leech. She usually takes Ferra to random places, and likes to scare people with her. Even though Ferra might not seem like she...er...has a brain(?), she often responds to the sound of Tectonic's voice by making a slight squeaking sound. Ferra will also not attack Tectonic or try to suck her blood, and she wont to anyone else- that is, unless Tectonic tells her to. (It is also worth mentioning that Ferra is larger than a normal leech. She is as long as the length from the tip of Tectonic's middle finger, down to her wrist. She is also quite a bit thick.)

Tectonic as a human; Credtis to Nikkie! 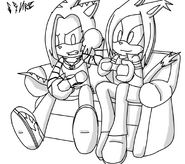 Her SUPER OLD design, back when she was still a fox-wolf-dragon thing!

drawn by SilvazeLover 2 as an art-trade; kinda looks like a chibi XD s'cute, either way 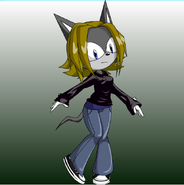 Tec on the Charrie Maker